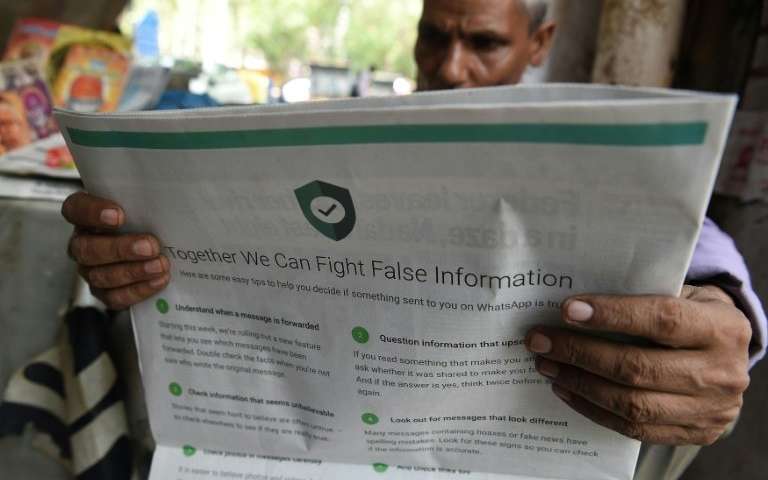 India has been shaken by a spate of mob killings sparked by a hoax about child kidnappers spread on WhatsApp.

In just two months, 20 people have been murdered in such attacks. Officials and social media platforms have so far been powerless to stop the violence.

But who is to blame? And why is a rumour turning people to violence?

A rumour is born

An online hoax emerged more than a year ago in eastern India claiming strangers were sedating and abducting children. Six men falsely accused of snatching kids off the streets were killed by mobs in Jharkhand state, police said.

In February this year, the rumours resurfaced nearly a thousand miles away in western India. By May, it had reached the country’s southern states, often accompanied by a grainy video purporting to show men on motorbikes stealing kids.

This falsehood spread like wildfire via WhatsApp, which boasts 200 million users in India who send a billion messages a day.

Translated into regional languages, the rumour triggered violence across India, particularly in rural areas where distrust of outsiders is entrenched and digital literacy is poor.

By early July, at least twenty people had been killed in the previous two months. Among the victims were homeless people, two picnic goers and an elderly woman handing out chocolates to children.

India’s police rounded up suspects and formed patrols, driving village to village to quash the rumours. In some areas, travelling musicians sung about the scourge of fake news.

Authorities in some states shut down internet access in a desperate bid to stop the hoax from spreading.

But the awareness campaigns had limited effect. In one instance, an official “rumour buster” was himself beaten to death.

Anger turned to WhatsApp, blamed by authorities for spreading “irresponsible and explosive messages”.

WhatsApp said it was “horrified” by the violence and assured Indian authorities it was taking action.

The Facebook-owned company said it was working with Indian researchers to better understand the problem and had introduced changes which it said would reduce the spread of such messages.

But some pointed out that WhatsApp as a medium was not to blame, and urged the authorities to tackle the violence.

India is no stranger to mob violence, with well-documented cases of crowds turning on victims for every manner of transgression, real or imagined.

In recent years, for example, there has been a sharp escalation in “cow vigilantism” — Hindu extremists murdering Muslims and thrashing low-caste Dalits accused of killing cows or eating beef.

Many of the victims in other vigilante killings, such as those over child kidnapping rumours, are targeted because they are outsiders.

India is fertile ground for fake news to take hold and spread.

It has a billion-plus mobile phone users — more than any other country on earth — and close to half a billion people with internet access, most via their smartphones.

Cheap handsets and data plans are bringing more Indians online but many are first-time internet users unskilled in discerning fact from fiction.

Indian police say there is no substance to the child kidnapping rumours, but the viral videos may not appear outlandish to some.

More than 120,000 children were abducted or went missing in 2016, according to the most recent Indian government figures. There is no data available on the number of children who were found.