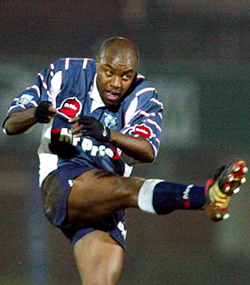 IN the Afrikaner heartland of Free State, you’d visualise the person they nickname “King of Bloemfontein” – the deeply conservative province’s sport-mad capital – to be a locally-born heartthrob, someone like Kepler Wessels or Hansie Cronje, men credited with inspiring a generation of Boer cricketers raised on a strict diet of rugby.
When that person is not a large and rugged Afrikaner, non-South African, but, in fact, a black rugby player from Zimbabwe, short of stature, it makes the story of Kennedy Tsimba truly remarkable.
It demonstrates in full measure lofty endorsement of a man who, at the peak of his powers, not only dominated South African domestic rugby, but is globally recognised as one of the world’s top fly-halves of the early 21th century.
Hall of Famer
In 2012, World Rugby recognised Kennedy Tsimba and his late older brother Richard as two of the game’s greatest players of all time and inducted them into its Hall of Fame – a place reserved only for global luminaries of the game, the greatest honour an individual can ever achieve.
Prior to that, the Tsimba brothers had been the only two black people on the illustrious list, until the late iconic South African President Nelson Mandela was posthumously inducted at the 2015 World Cup in England for fostering better race relations in the country through rugby following the demise of apartheid.
“I was doing TV work for SABC during the World Cup few months ago when the news came through that Nelson Mandela had been inducted,” says Tsimba, back home in Harare for the festive season break.
“I was asked to describe how it felt to be in such company of an icon like Nelson Mandela, and him becoming only the third black person on the list. I said ‘at least a brother has come, we were feeling lonely’. Given two options, I’d choose to be inducted into the Hall of Fame to winning the World Cup. It’s only for the greats. To have Nelson Mandela there, epitomises the height of the achievement.”
Symbol of equality
Athletic prowess aside, Tsimba also rose to become a cultural icon, a people’s champion. By peerlessly excelling at a sport closest to the hearts of the Free State folk, and in a position considered sacred, preserve of the stereotypical local blue-eyed pin-up boy – Tsimba became the ultimate symbol of equality, ample proof that people of every race and background can lay claim to greatness in their chosen field.Advertisement

“When I arrived at Free State Cheetahs I was the only black player. The faces I saw when I first got there, and the faces I saw after my first game … that’s when I realised the power of sport to change attitudes and hatred towards another race,” Tsimba says. “A few months down the line, I didn’t have to pay for anything in a restaurant. I had people picking up the bills for me. People would buy me a drink so they could have just five minutes of my time.
“Later on, the Zimbabwean youngsters who came, Beast (Tendai Mtawarira) and Tonderai (Chavhanga), found it much easier to break through because of the impact I’d made. All the unions were saying ‘let’s go to Zimbabwe. Surely there are more Tsimbas there’. Union officials were calling me to say ‘do you know this guy?’.”
The making of a King