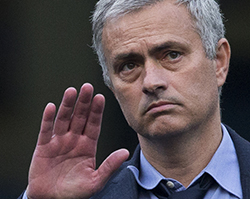 WHEN Chelsea were crowned 2014-15 Premier League champions in May, the Blues appeared ready to dominate the English top flight for years to come.
Star man Eden Hazard was named Player of the Season and seemed capable of challenging Lionel Messi and Cristiano Ronaldo as one of the best players in the world, Jose Mourinho was elected Manager of the Season to further add to his reputation as one of the most successful coaches in the history of the game and the relatively young average age of Chelsea’s squad seemed a guarantee for more success.
Fast forward eight months, though, and Chelsea find themselves in an entirely different situation.
After nine defeats in 16 games, the Stamford Bridge outfit are battling against relegation, sitting 16th on the Premier League table.
To make matters even worse, Mourinho had seemingly lost the dressing room, with a number of reports suggesting key figures such as Hazard, Diego Costa, Cesc Fabregas and Nemanja Matic had all fallen out with the Portuguese manager.
Chelsea therefore felt they had no other choice but to part ways with Mourinho on Thursday for the second time in his career, previously dismissing him in September 2007. Where did it all go wrong for the former Porto, Inter and Real Madrid coach?
Pre-season struggles
After seeing his team struggle for fitness toward the end of the 2014-15 campaign following a rather intense pre-season, Mourinho opted to go for a different approach this time around in an attempt to keep his players fresh throughout the season.
“We chose to give the players a proper holiday. Last year we started early and played a lot of matches before the start of the season and we had a fantastic start. We paid for that quick start and that fast pre-season in the end of the season. We were tired. The team had problems, the team was tired,” Mourinho commented back in August.
Sadly enough for the Chelsea manager, things did not work out as expected, with the reigning champions winning just one of their five opening league games.
“This season we tried to go in another direction with a slower start, a short pre-season. Clearly some bodies didn’t react as well as we expected.”
Eva Carneiro has the last laugh
Chelsea’s opening fixture at home against Swansea City ended in a 2-2 draw, but the post-match conversation was about team doctor Eva Carneiro rather than the game itself. Carneiro and physiotherapist Jon Fearn rushed on to the pitch to treat the apparently injured Hazard, resulting in an angry reaction from Mourinho.Advertisement

Both Carneiro and Fearn were relieved of their first-team duties after the incident and the former eventually even left the club. Mourinho was cleared by the FA of making discriminatory comments, but the damage was already done as the incident continued to make headlines, distracting players and staff from the task at hand on the pitch.
To make matters even worse, Carneiro took legal action against Mourinho following the incident.
John Terry had always been one of the first names on the team sheet for Mourinho, yet the experienced centre-back was surprisingly hooked at half-time during the 3-0 defeat at the hands of Manchester City.
The Chelsea skipper was then handed a straight red card in the 3-2 win over West Brom the week after, resulting in a one-game suspension. Terry has since been in and out of the team and his relationship with Mourinho was damaged, perhaps beyond repair.
Southampton referee outrage
Mourinho has never been one to hold back when he feels his team is being treated unfairly by the match official, but he came close to losing the plot after his side’s 3-1 defeat to Southampton at Stamford Bridge.
The former Madrid boss went on a seven-minute rant in a post-match interview, claiming referees are afraid to give decisions in Chelsea’s favour after Radamel Falcao was denied a penalty versus The Saints.
Understandably, the FA was not impressed with Mourinho’s comments and handed him a suspended stadium ban and £50,000 fine.
Wenger obsession
The on-going war of words between Mourinho and Arsene Wenger took a turn for the worse when both sides met on September 19. Chelsea would beat their London rivals 2-0, thus making amends for the Community Shield defeat earlier this season, but that did not stop the Portuguese from taking dig after dig at Wenger.
There were no direct consequences for Mourinho this time around as he evaded any punishment, but his focus was once more on anything but his own team, thus further damaging his reputation and leading to criticism from a number of high-profile names in the game.
West Ham dismissal
With pressure continuing to grow as Chelsea failed to replicate the form that saw them lift the Premier League trophy last term, Mourinho lost his cool in the away game versus West Ham.
The 52-year-old was forced to watch the second half from the stands after an altercation with referee Jonathan Moss at half-time at the Boleyn Ground following Matic’s red card shortly before the break.
With Chelsea down to 10 men, Andy Carroll netted the winner in the 79th minute, Mourinho watching on surrounded by celebrating West Ham fans.
He eventually received another hefty fine for his behaviour and served a one-match stadium ban.
League Cup exit
With Chelsea effectively out of the Premier League title race already, the League Cup gained importance as a relatively easy route to silverware. Things were not meant to be for Mourinho’s men, though, as Stoke proved to be too much of an obstacle in the fourth round.
Loic Remy netted a 91st-minute equaliser to cancel out Jonathan Walters’ opener, but Eden Hazard eventually missed the decisive spot kick to end his side’s hopes of League Cup glory.
Diego Costa bib-gate
After playing a major role in Chelsea’s successful 2014-15 campaign, Diego Costa is nowhere near his best this term and Mourinho consequently opted to drop the Spain international for the trip to Spurs.
Diego Costa was not amused and threw his bib in the coach’s direction after he was sent out to warm up, only to then be told to sit down again.
“Betrayed” at Leicester
With Chelsea beating Porto 2-0 to book their ticket for the Champions League knockout stages, they appeared to be back on the right track heading into the Premier League game against surprise package Leicester City.
The Blues failed at the King Power Stadium though, where Diego Costa was seen shouting at his own defenders, while Hazard decided to effectively substitute himself due to injury as Claudio Ranieri’s men emerged victorious following goals from Riyad Mahrez and Jamie Vardy.
Mourinho was furious at his players and accused them of betraying him in his post-match interview, effectively making it impossible for himself to continue in charge.