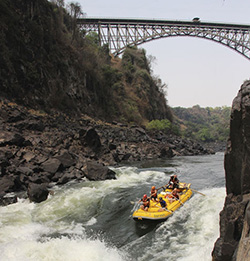 WHITE water rafters operating along Zambezi River are fighting to stop the construction a billion-dollar hydro-electricity power plant across the boundary between Zimbabwe and Zambia.
The proposed Batoka hydro-electric power station will be situated along the Zambezi River upstream of the Kariba hydropower plant and downstream of the Victoria Falls.
Zambezi River Authority (ZRA) chief executive, Munyaradzi Munodawafa, recently revealed that a group of rafters had set up a website to advocate against the power project.
Munodawafa, at Zambia media briefing at Livingstone’s Protea hotel last Wednesday, implored those campaigning against the project to consider the benefits which can be derived from it, including the creation of thousands of jobs.
Even so, he however, pledged that construction would not disturb the existing water rafting activities.
According to Munodawafa, this becomes the third time the project has been stalled since it was mooted 24 years ago.
It was initially delayed by a dispute over the payment of the Central African Power Corporation debt arising from the construction of the Kariba Dam in the Rhodesian era. Zimbabwe later moved to settle its arrears.
The Batoka hydro-electricity scheme is a three-phased project involving the construction of a dam, power station and transmission lines.
At completion, the $3 billion power station will generate 2,400 megawatts of electricity, to be split alike between Zimbabwe and Zambia.
The clean energy project has the potential to ease power supply gaps in the two countries which have been facing deficits induced by a drop in water levels at Kariba hydro power station, also jointly owned by Zimbabwe and Zambia.
Zimbabwe added 150 megawatts to the country’s power grid last week under the Kariba south extension which targets a total of 300 megawatts by first quarter of next year as the country works to reduce power imports.
The country owes both South Africa and Mozambique millions for supplied electricity.
According to media reports, approximately $10 million is needed to import supplementary power each month.
A few years ago, the country once plunged into serious power deficits which left citizens contending with tight load shedding schedules.Advertisement