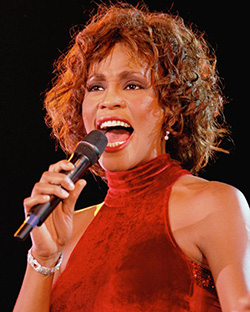 A HOLOGRAPHIC representation of the late Whitney Houston will tour the world in 2016, it has been announced.
The project is being organised three years after the singer’s death by Hologram USA in conjunction with Pat Houston, Houston’s sister-in-law and president of her estate.
In a statement, Pat Houston said the hologram would be “a great opportunity for her fans to see a reinvention of one the most celebrated female artists in history and to continue a legacy of performances that will not be forgotten in years to come”.
The virtual recreation will perform in “a major US venue” for a show that will be beamed to TVs and computers around the world via FilmOn Studios, a live-stream website and TV app developed by Hologram USA.
After the show’s debut online, the hologram is expected to go on an international tour.
It is not the first time that a hologram of a celebrity has been made posthumously.
Last year, a hologram of Michael Jackson made an appearance at the Billboard Music Awards, mirroring the late King of Pop’s trademark moonwalking dance moves.Advertisement