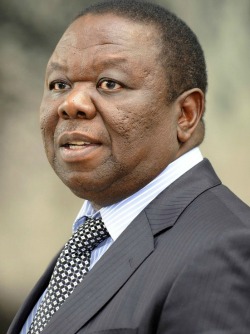 THERE is a Shona idiom, which goes, “dindingwe rinonaka richakweva rimwe, kana iro rokweiwa roti mavara angu azare vhu”, meaning one feels ‘good’ when inflicting harm on others but is quick to complain when the same is done to him/her.
This old saying aptly describes the behavior displayed recently by MDC-T leader Morgan Tsvangirai amid reports that his party deputy treasurer-general Elton Steers Mangoma had advised him to step-down as he had failed to dislodge President Robert Mugabe and his Zanu PF party from power for almost a decade and a half.
Apparently, in high dudgeon, Tsvangirai said senior party officials calling for his departure were plotting a coup against him and should not abuse his “good character”. “Why are you trying to remove me in a hostile way?” Tsvangirai was quoted as saying by New Zimbabwe.com. “If you want power, wait and we go for congress so that you stand here and I stand there and say to the people choose a leader you want. I will step down if I lose but not this way of forcing me out…”
These are words attributed to a man who almost 14 years ago warned President Mugabe of potential violence if he refused to step down before elections that were scheduled for 2002. “The time for national action is now,” Tsvangirai said to enthusiastic cheers and applause, according to a BBC report on September 30, 2000. “What we would like to tell Mugabe is please go peacefully. If you don’t want to go peacefully, we will remove you violently.”
As if that was not enough, the BBC also reported that some MDC supporters who were part of the 20,000 people that gathered at Rufaro Stadium to celebrate the party’s first anniversary carried banners reading “We cannot wait until 2002”.
Given these well documented utterances, it is baffling to see how deceitful Tsvangirai sounded last week when he chided those within his party that can’t wait for the 2016 elective congress. For him to ask “why are you trying to remove me in a hostile way?” and say “if you want power, wait and we go for congress” is morally stinking, worse than a derelict blair-toilet in Buhera (no pun intended).
If Tsvangirai wanted President Mugabe to go before his term expired, why can’t he accept the same calling coming from his camp? What is the difference between what he asked the Zanu PF leader to do in 2000 and what one or a few from his party are asking today? Could it be that Tsvangirai has experienced his own Damascus moment, regarding Constitutionalism?Advertisement

I argue that there is no Pauline turnaround with him; rather here is a man who has a selective amnesia and to some extent power hungry. “I am ready to take this country to the promised-land; me as your leader and you following me,” he said. When it suits him, Tsvangirai is an aficionado of the law and constitutionalism in general and when it doesn’t he tells a sitting president to pack his bags and go to Zvimba.
But Mangoma and his cabal (if any) should have learnt this lesson a long time ago. The MDC split into two formations in 2005 all because of Tsvangirai’s heavy handedness and failure to accept party resolution to participate in senate elections that were penciled for November 26 the same year. The MDC national council had voted 33-31 in favor of contesting the election (with two spoiled papers).
However, Tsvangirai told the media that the debate was tied at 50-50, which included proxies sent by Sekai Holland and Grace Kwinjeh, alleging that these were not recognised by then secretary general Welshman Ncube, giving him different inaccurate figures. He then overruled the vote, arguing that it was no use contesting an election where the electoral field “breeds illegitimate outcomes and provides for predetermined results.”
The late Gibson Sibanda, then MDC deputy president, had no kind words for Tsvangirai following his intransigence. “We do not and will not recognise the unlawful resolution made by an unlawful gathering purporting to be the MDC national council,” Sibanda said. “It is a matter of great regret that Morgan Tsvangirai continues to show disdain for the constitution of the party.”
So, the bottom line here is that Tsvangirai should not play victim, when he has previously done the same thing that Mongama is doing. No sane person will give him tissues to dry his crocodile tears.
Mathew Nyaungwa is an M.A Journalism and Media studies student at Rhodes University, in South Africa. He can be contacted at mathew@rough-polished.com