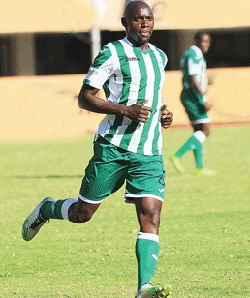 A PANEL of football experts converge in Harare on Tuesday to select the outstanding players in the just ended season with the question on the lips of soccer fans being who will be crowned the king of domestic football.
Head coaches of all the 16 Premier Soccer League clubs, team captains and selected journalists will be tasked to come up with this year’s 11 finest footballers.
However, the soccer star calendar is likely to be dominated by several players from newly crowned champions Caps United after defying odds to win the championship for the first time in 11 years.
United left-back Ronald Pfumbidzai is one player who is likely to make the cut; so is right back Hardlife Zvirekwi who has been very consistent for both club and country.
It will also be difficult for the selectors to ignore the contributions of such players like veteran striker Leonard Tsipa after he finished the season as top goal scorer with 11 goals.
At 34, Tsipa has bellied his rather advanced age to decide key contests culminating in the team finally realising their championship dream having waited for over a decade. He has a strong case for the overall award.
Team captain Moses Muchenje and Joel Ngodzo will also make a strong shout for inclusion on the Soccer Stars of the Year Calendar list.
United coach Lloyd Chitembwe is also certain to be crowned Coach of the Year after having written a glorious page for Caps United becoming the first player to win the championship both as a player and coach.
Chitembwe has also finished the season without tasting defeat at the National Sports Stadium since he assumed the post in September last year.