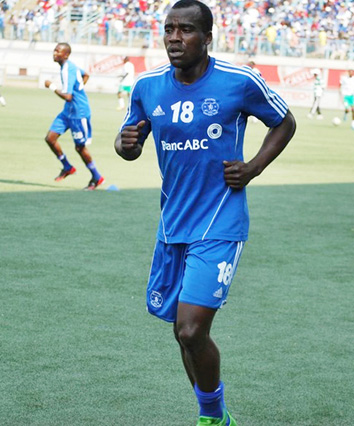 AS the PSL season comes to an end on Sunday, the outstanding eleven Castle Lager Premier Soccer League (PSL) players for the 2014 soccer season will be selected on Saturday with a new voting format set to be introduced.
But the question is who will make it onto the soccer calendar this season which appears very difficult to pick the outstanding player of the season.
A number of names have been thrown around of those players who are believed to have shone like beacons during the season.
They include the likes of Dynamos’ Stephen Alimenda, Blessing Moyo, Highlanders’ Charles Sibanda, Hwange’s Evans Rusike, Caps United’s Ronald Pfumbidzai, ZPC
Kariba’s trio of Dennis Dauda, Pride Tafirenyika and goalkeeper Tendai Hove, There is also Black Rhinos’ Wonder Kapinda among others.
PSL chief executive officer Kennedy Ndebele said selection would be done under a new PSL voting system, a secret computerised electronic ballot.
“The electronic voting system will be supervised by a panel of experts who include media editors, football stakeholders, as well as Delta Beverages internal and external audit firms.
“The selection panel will consist of 16 Castle Lager PSL current coaches, 16 Castle Lager PSL current club captains and 32 media practitioners.
“Panelists have been involved in the selection of the Castle Lager PSL player and coach of the month awards from the beginning of the 2014 season,” Ndebele said.
The winner of the 2014 Castle Lager Soccer Star of the Year shall receive a trophy and $5 000 prize money.
Ndebele said any player who accumulated six yellow cards or more during the course of the season up to selection time would not be eligible for the awards.
“Any player who is shown and accumulated two or more red cards during the course of the season up to selection time will not be eligible for the awards and will be disqualified.
“Any player who is summoned and found guilty by the PSL Disciplinary Committee or courts of law during the season will be disqualified,” the statement reads.
Also the most outstanding referee will be selected by the referees committee.

The Soccer Star of the Year runners up will get $3 000 and $2 000 respectively with the rest of the finalists taking home $1 000 each.
There have been no increases in the prizes from last year.Advertisement