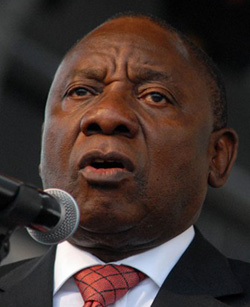 ONCE again South Africa’s intelligence services are embroiled in controversy, apparently involved in dirty tricks and criminal activity.
New evidence of this has come to light against the backdrop of the presidential succession race in the governing African National Congress (ANC). One of the contenders, deputy president Cyril Ramaphosa, has been smeared in an apparent covert operation. It seems that those responsible had access to intelligence resources. In another recent case the country’s minister of police Fikile Mbalula was targeted in an undercover plot.
Since 1994 the intelligence services have been embroiled in many scandals. But because they operate secretly and with minimal oversight, South Africans will probably never know exactly what they are up to.
What is known – from revelations, leaks and investigations over the past 20 years – is that the intelligence services have not been adequately transformed since South Africa’s transition to democracy. The services have more in common with their apartheid-era predecessors than with the principles of the country’s democratic constitution.
This alarming state of affairs was exposed in a report based on an inquiry into the intelligence services in 2006-2008. The inquiry, known as the Matthews Commission, was established by then intelligence minister Ronnie Kasrils after the domestic intelligence agency was caught spying illegally on senior ANC members and other politicians.
The commission produced a 300-page report that revealed the various ways in which the intelligence services were failing to comply with the constitution and legislation. The report also included numerous recommendations to ensure compliance.
The public release of the report was potentially a watershed moment. It shone a glaring spotlight on the normally dark corridors of the secret world of intelligence operations and offered a rare opportunity to clean out the rot. But the cabinet and parliament buried the report. This inflicted lasting damage on South Africa’s constitutional democracy.Advertisement

What’s gone wrong
The intelligence scandals that have plagued post-apartheid South Africa are symptoms of a distressing lack of transformation, which is due to five factors.
First, the intelligence services are closely aligned to the ruling party and enmeshed in its factional politics. The constitution insists that the services must be politically non-partisan. But the executive and the ANC constantly blur the boundary between the party and the state.
This malaise is reinforced by the enduring affinity between ANC politicians and intelligence officers who were comrades during the liberation struggle.
It’s also relevant that the minister of intelligence and the heads of the services are appointed by the President. These appointments appear to be based on personal loyalty to him rather than on professional integrity and loyalty to the constitution.
The second reason for the lack of transformation is that the intelligence services have a culture of disregard for the law. The Matthews Commission was shocked to discover that the head of the National Intelligence Coordinating Committee believed that intelligence officers could legitimately “bend the rules” when confronted by serious security threats.
“Bending the rules” is a euphemism for breaking the law. Even if it is well intentioned, the problem is obvious. Disrespect for the law inevitably creates an environment in which misconduct flourishes. It also inevitably leads to intelligence officers lying to their minister and to parliament about breaking the law.
Third, the intelligence services are shrouded in excessive secrecy. They obviously need to keep certain matters secret, such as lawful investigations and the names of undercover agents. But the South African intelligence community is vastly less transparent than its counterparts in many other democratic countries.
Higher levels of secrecy lead to less public scrutiny and a greater risk of abuse of power.
Fourth, the intelligence oversight bodies lack the stomach to do their job. The Office of the Inspector-General of Intelligence is empowered by exemplary legislation. The office has all the authority and powers it needs to conduct thorough investigations into alleged misconduct by the intelligence services. Sadly, it is scared to exercise these powers.
The office’s website asserts that “confidentially is the overriding principle” governing the work of the inspector-general and her staff. This reflects a deeply flawed understanding of the role of statutory oversight bodies. The overriding principle ought to be accountability – that is, the accountability of both the inspector-general and the intelligence services to parliament and the public.
The website itself is a perfect example of non-accountability and lack of transparency. It doesn’t provide any information about any investigation conducted by the inspector-general since 2008. It merely includes a list of media reports, the most recent dated 2010.
The joint parliamentary oversight committee on intelligence also has substantial authority and powers to deal decisively with intelligence mischief. But it too resembles a bunch of sheep guarding a pack of wolves.
The only entities that have made a serious attempt to hold the intelligence services accountable are non-governmental organizations. The most notable has been the Right to Know Campaign.
Finally, the experience of South Africa confirms a general lesson from newly democratic countries: the security services will be transformed if, and to the extent that, the executive wants them to be.
If the executive is not committed to transformation, the security services will be loyal to the president and the ruling party. They will not be loyal to citizens and the constitution. And they then pose a severe threat to democracy.
Laurie Nathan is Professor of International Mediation at the University of Pretori. This article was first published by theconversation.com.