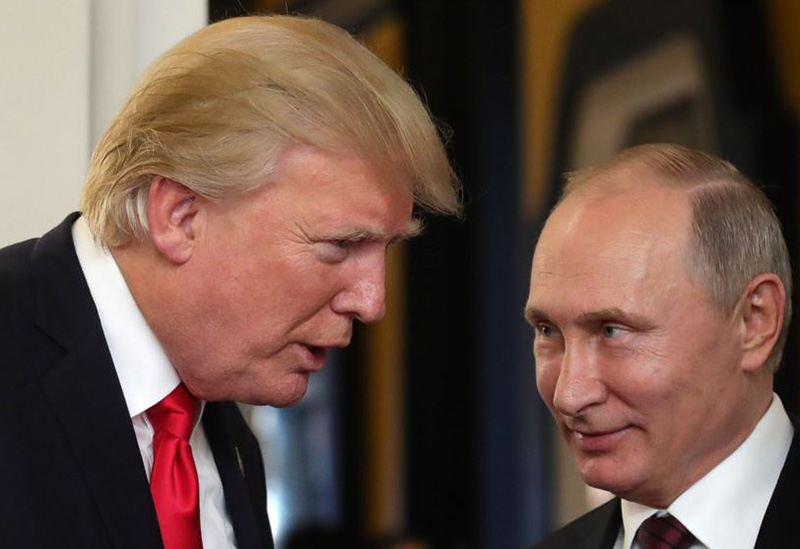 PARIS: Sweeping accusations that the Kremlin tried to sway the 2016 U.S. election haven’t chastened Russian trolls, hackers and spies — and might even have emboldened them.

Russia denies any interference. So far U.S. authorities haven’t announced any huge hacks or the kind of multi-pronged campaign suspected in the 2016 election, and it’s hard to judge whether the more recent Russian actions have any link to the Kremlin or will have any electoral impact.

But why do they appear to be at it again? Dozens of Russians suspected of meddling in 2016 have been hit with U.S. charges or sanctions, including well-placed magnates. Moscow’s ties with the West have deteriorated badly amid ever-more-shocking allegations of Russian interference abroad.

And some argue that Russian meddlers don’t need to mess with the U.S. midterms this year because they got what they wanted in 2016: Donald Trump in the White House and mass disillusionment with the democratic process.

The Kremlin likes Trump because he’s one of the rare Western leaders to embrace Russian President Vladimir Putin, but it’s hoped-for Russian-American rapprochement hasn’t really materialized. A Democratic House or Senate after Tuesday’s U.S. election would make that an even more distant prospect.

“Russians have a preference and they will do what they can to swing (the result) in their favour, especially if margins are tight,” said James Nixey, head of the Russia and Eurasia program at the London-based think tank Chatham House.

He cautions, however, that “Russia is not responsible for all of America’s problems. America has splits and fissures like all of us, and Russia puts in a lever and pries them open.”

Some Russians, meanwhile, wear the U.S. accusations as a badge of honour, a sign that their country is a fearsome world power again.

The first person charged with foreign interference in the 2018 midterms, Elena Khusyaynova, said “my heart filled with pride” at the news. Speaking last week on Russian TV after being indicted in the United States for a covert social media campaign for both the 2016 and 2018 votes, she added, “It turns out that a simple Russian woman could help citizens of a superpower elect their president.”

Pavel Koshkin of Moscow’s USA and Canada Institute called accusations of meddling “a gift to Russian propaganda and Russian politicians,” who can use U.S. anti-Russian sentiment “as a tool in stirring anti-Americanism and increasing their approval ratings.”

The 2016 U.S. election thrust Russian foreign interference into the spotlight, but it wasn’t an isolated project. It fit into a years-long effort by Putin’s Kremlin to take revenge over what’s seen as the U.S.-led humiliation of post-Soviet Russia, through crippling loan programs and NATO’s post-Cold War expansion.

The Kremlin also resents what it considers U.S. interference in the politics of countries once under Moscow’s sphere of influence, from Ukraine to the Caucasus. To many Russians, what’s happening now in the U.S. is just payback.

The resulting U.S. sanctions have damaged the Russian economy, but if the goal was changing Russian foreign policy, “this goal certainly hasn’t been achieved,” said analyst Masha Lipman. “In fact, the opposite is true. The more pressure (on Russia), the lower the desire or willingness to concede.”

As special counsel Robert Mueller has investigated possible Russian collusion with Trump’s 2016 campaign, Moscow has increased efforts to make its mark elsewhere — in Syria, Libya, and in political debates across Europe.

So far in 2018, Russian agents have been accused of a nerve agent attack in Britain, trying to hack the world’s chemical weapons watchdog in the Netherlands, and seeking to derail a referendum in Macedonia to stop the country from joining NATO and the European Union.

Even after Mueller’s team in February indicted a dozen Russians linked to the Internet Research Agency, the so-called troll farm in St. Petersburg, its sponsors openly continued to target U.S. audiences.

One of its projects, a news site called USAReally, covers tight U.S. congressional races and is closely following the migrant caravan heading north from Latin America.

“Yes, we are a Russian site. We talk to Americans about America. But is that forbidden?” its chief editor Alexander Malkevich, an avowed Trump fan, said in an interview with The Associated Press. “Influence readers? Every media wants to do that. … and so what?”

He acknowledged that Russian-American relations are unlikely to improve quickly no matter the outcome Tuesday — and expressed interest in the 2020 U.S. presidential race.

Malkevich also assails what he calls the myth of American democracy. That’s one more way that alleged Russian manipulation of U.S. social media serves the Kremlin’s interests: By discrediting Western democracy, that strengthens Putin’s argument to his own voters that his authoritarian model of governance is best.

“The growing confrontation with the West and a focus on it on national television channels probably helped consolidate this effect of a fortress under siege,” one of Putin’s metaphors for modern Russia, Lipman said. “And pledging allegiance to the leader is a matter not only of loyalty but even of national security and national identity. ”

Many of the Russians accused of interference in the 2016 U.S. campaign have moved underground or moved on. Some shut down their social media presence. Some have changed jobs.

One of the indicted troll factory workers, Sergei Polozov, announced on the Russian social network VKontakte that he was “using his notoriety for a good cause” and had persuaded Russian censors to block four Ukrainian news sites.

He vowed to continue fighting those who “try to drag Russia through the mud” and thanked “those who want to join me in the fight against informational enemies.”

The troll factory, meanwhile, has moved to bigger offices in St. Petersburg, just 2.5 kilometres (a mile and a half) across town.