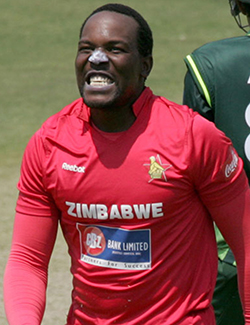 HEARTY congratulations to Hamilton Masakadza on being appointed Zimbabwe cricket captain, a job he always felt he thoroughly deserved.
Nonetheless, if you ask me about my views on that decision, I will stick my neck out and say Masakadza was definitely not the right choice.
Why load a player who is already 32, whose international career has been a little bumpy and who has recently only rediscovered his form after being dropped from the team due to lack of runs?
At the moment, Masakadza is a batsman in good nick. He had a decent outing in the 3-2 ODI defeat to Afghanistan in the UAE, and his 93 not-out to level the Twenty20 series against Bangladesh were abundant proof of the class we all know he possess when in full, glorious flow – but then class he hasn’t always demonstrated when it really matters and stakes are high.
Throw in his world record for the most runs scored in a T20 bilateral series, a total of 222 runs across four games on that Bangladesh tour, and few can argue that Masakadza is a cricketer made of the right stuff.
But let’s not get carried away.  We are still talking here of the same man who, from time to time, is not only prone to poor form, but has also left selectors with no choice but to exclude him from the World Cup squad – twice.
I don’t know how long Masakadza is going to be round. But for the remainder of his international career, I would have just let him enjoy his newly found form, concentrate on his individual game and work on him to be a good, match-winning player for the team – without the added responsibility of directing team tactics and leading the side.
For continuity’s sake, I would have gone for a younger, promising captain who would form the long-term future of Zimbabwean cricket, someone expected to be around for a very long time, someone who would continue to grow and demonstrate leadership. That captain, of course, would need to have people around him to help and guide him.
South Africa did that with a 22-year-old Graeme Smith more than a decade ago, and the team reaped the rewards of the board’s shrewd foresight. Smith went on to become one of his country’s greatest captains of all time, and Test cricket’s most successful skipper.
In Zimbabwe, Tatenda Taibu had similar traits. Anointed Zimbabwe’s captain at the age of 21, endorsed and highly recommended by such senior players as Andy Flower and Guy Whittall, Taibu had a very good cricketing brain and had the makings of a very good leader over many years had his international career not suffered unfortunate interruption due to boardroom politics.Advertisement

Lack of natural leadership qualities
Leadership comes naturally. It’s a set of in-born skills.
A key attribute of leadership is commanding respect. Masakadza does not command a fair amount of respect within the team beyond being a capable player.
It’s not personal; just that the way people respond to their leaders is also natural. It’s chemistry.
Unfortunately, there don’t seem to be chemistry between Masakadza and the young members of the team as was the case, say, in most recent times, when Tatenda Taibu and Brendan Taylor were given the captaincy.
This privileged piece of information about Masakadza and team relations is a pretty sad revelation of a chap who not only depicts a smiling, happy cricketer – but is also a remarkably down-to-earth and approachable individual, always ready to be stopped in the street to talk about cricket and life’s more pressing matters.
But captaincy is not always about the guy with the easiest smile. Some of the most successful international captains in the history of the game – Allan Border, Mike Atherton, Graeme Smith to name but a few – were some of the grumpiest fellas around.
Taylor’s big shoes