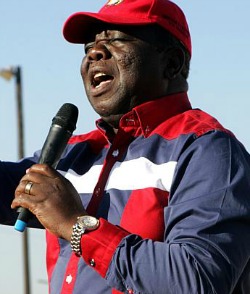 THE highly anticipated 31 July 2013 watershed Zimbabwean elections did not live up to the high expectations of taking the country forward in its quest for full democratisation; rather the announced election results took the country back to the pre-1999 scenario of one-party dominance in all spheres of government and the state. How was this possible after the painful sacrifices made by millions of Zimbabweans for over a decade to push the country towards a path of full democratisation? How could all the strides that had been achieved towards eradicating one-man and one-party rule all be lost within a wink?
Inconsistent leadership
Morgan Tsvangirai has been at the helm of the MDC party since its formation in 1999. As a political activist, Tsvangirai made huge personal sacrifices as he highlighted the democratic challenges the country was facing (and is still facing). Domestic and international convergence was reached on the need for democratic reforms in Zimbabwe, and this brought in SADC and AU facilitators to help the country implement democratic reforms. Tsvangirai can be fully credited for having brought the Zimbabwean democratic struggle into the international fore.
However, the biggest weakness to Tsvangirai’s leadership of the democratic movement in Zimbabwe has been his lack of consistency in pursuing strategic political positions that he himself and the MDC pronounces. In a recent example, Tsvangirai was quoted in the local newspapers pronouncing that he was prepared to meet President Mugabe to discuss issues pertaining to his continued stay in a government mansion in Highlands and also discuss with the President if he was entitled to or qualified for a government pension. How hypocritical and inconsistent for a leader who had publicly declared in August 2013 that he would not have anything to do with an “illegitimate leader” who had stolen the July 2013 elections.
Tsvangirai then went on to command all MDC members not to accept any government appointments, and members of Parliament were ordered to boycott the opening of parliament addressed by the “illegitimate President”. How is it possible then for Tsvangirai to meet the same “illegitimate President” to negotiate his own personal comforts? It is these high levels of strategic inconsistencies displayed by Tsvangirai that Mugabe and Zanu PF have fully taken advantage of to perpetuate their hold on power and reverse all the democratic strides that had been achieved in the last decade.Advertisement

Focus on the critical electoral reforms that ensure that ZEC is truly independent and stuffed by professionals. The voters’ roll must be controlled only by ZEC.
Repositioning the MDC to work closely with all civic, business and student bodies.
Unite all democratic forces under one umbrella, Tsvangirai has dismally failed to bring unity to the two MDC parties and other democratic forces.
Crafting strategies to undertake successful rolling mass action to force the Zanu PF government to implement real democratic reforms.
Crafting strategies that take advantage of the current vulnerability of the Zimbabwean government to the economic mess they created, and force the party to implement democratic reforms.
Using social media and communication technology such as Facebook, Twitter, Whatsup, etc, to mobilize people to stand for a common cause.
Refuse to take part in any form of elections organised by ZEC in its current form, and consistently stick to that. The MDC cannot accuse ZEC of having helped to rig the June 2008 and July 2013 elections and yet participate in by-elections organised by the same unreformed institution.
Openly support the lifting of the targeted sanctions so that Zanu PF has no excuse for its incompetence, corruption and limited knowledge of the working of the global economic system.