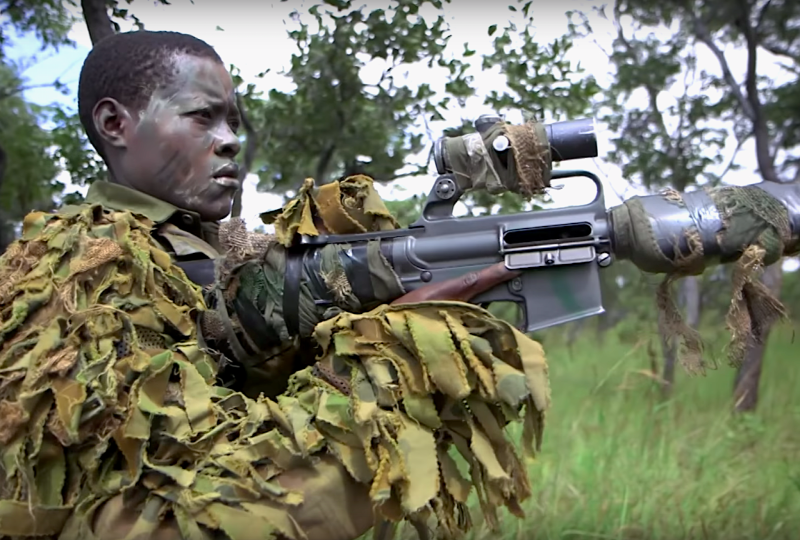 One of the female rangers stands guard
Spread This News

THE Akashinga, or “brave ones’ survived abuse and exploitation. Now, armed and trained like special forces, they are protecting Zimbabwe’s most iconic wildlife.

Sgt Vimbai Kumire, 33, and her all-female wildlife ranger team, the Akashinga, are among the animals’ fiercest protectors. The rangers are an arm of the nonprofit International Anti-Poaching Foundation, which manages Zimbabwe’s Phundundu Wildlife Area, a 115-square-mile former trophy hunting tract in the Zambezi Valley ecosystem. The greater region has lost thousands of elephants to poachers over the last two decades. The Akashinga (“brave ones” in the Shona language) patrol Phundundu, which borders 29 communities. The proximity of people and animals sometimes leads to conflicts such as the one Kumire’s headed to now, involving the leopard.

At the scene, Kumire wades into an angry crowd. Standing five feet two inches tall, she could easily get lost in the chaos, but she moves calmly and confidently through the emotionally charged group, speaking softly but firmly. Ten injured men slowly come forward. One has a bandage on his cheek, another’s arm is wrapped in blood-stained cotton. Eight others nursing scratches and punctures cluster around her.

Conservation officials had collected the leopard’s carcass and accused the men of wrongdoing, inflaming the crowd. The injured men say the leopard attacked, but based on their minor wounds, the rangers are skeptical this was unprovoked self-defense. Killing wildlife without a permit is a criminal offense. But the leopard’s skin, teeth, claws, and bones—worth hundreds of dollars on the black market—represent a month’s salary in Zimbabwe’s impoverished economy.

With the carcass secured and the events surrounding the leopard’s death duly recorded, the team’s job now is to remind the community they’re here to help with wildlife-human interactions. The women load the wounded men into their truck and take them to the local clinic.

Scenes like this are the essence of the Akashinga’s mission and familiar scenarios for its founder, Damien Mander, a tattoo-covered Australian and former special forces soldier who has trained game rangers in Zimbabwe for more than a decade. His experiences serving in Iraq and on the front lines of Africa’s poaching war have taught him that change—be it peace among humans or attitudes about wildlife—can’t happen without buy-in from the community. “Local people have a vested interest in where they come from, where they live,” he says. “Foreigners don’t.”

With that local-first mentality, Mander turned to Phundundu’s surrounding villages—specifically their women—to fill the ranks of the Akashinga. After years of training male rangers, he concluded that in some ways women were better suited for the job. He found they were less susceptible to bribery from poachers and more adept at de-escalating potentially violent situations. He also knew that research shows working women in developing countries invest 90 percent of their income in their families, compared with 35 percent for men. In this regard, the rangers demonstrate a key conservation principle: Wildlife is worth more to the community alive than it is dead at the hands of poachers.

Mander sought women who had suffered trauma: AIDS orphans, victims of sexual assault or domestic abuse. Kumire joined after her husband abandoned her and their two daughters. Who better to task with protecting exploited animals, Mander reasoned, than women who had suffered from exploitation? He modeled his selection course on special forces training, subjecting the women to three days of nonstop exercises designed to test their teamwork skills while being wet, cold, hungry, and tired. Of 37 recruits who started the course, 16 were chosen for the training program; only three quit. Years ago Mander ran a similar course for 189 men. At the end of day one, all but three had quit. “We thought we were putting [the women] through hell,” Mander says. “But it turns out, they’ve already been through it.”

The next morning the sun rises over the Akashinga camp—a dozen green tents arrayed on a hilltop that offers a panoramic view of the region. The women eat breakfast, and Mander briefs them on the coming night’s two raids—one on the compound of a man said to possess an unlicensed rifle used to kill wildlife, the other on the home of a suspected poacher said to be trying to sell a leopard skin.

They spend the morning practicing, ensuring each ranger knows her position. Then Mander gets behind the wheel, four rangers jump in the back with a local police officer, who will oversee the raid, and the team sets off.

It’s after midnight when they finally approach the home of the suspected owner of the unlicensed rifle. Mander speeds into the compound and slams on the brakes. The rangers leap out and take up the positions they had practiced. One raps on the front door. Eventually the suspect allows them inside, where they find the dried skins of several duikers, a small antelope species. The man is handcuffed and loaded into the truck.

It’s a clear, black night, and the Milky Way stretches across the sky. The rangers have been up for nearly 24 hours. But the leopard skin seller remains at large. “We are not tired,” Kumire says. “We don’t tire until our job is done.”

Before they return to their base the next morning, they’ll arrest the alleged leopard poacher. The next night, they’ll catch a suspected elephant poacher. In the hours between, they’ll continue their patrols, removing several poachers’ snares. It’s results like this that show Mander his instinct was right. “Women like this can change everything.”