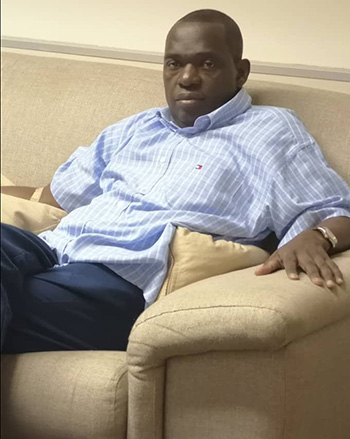 Minister Sibusiso Moyo in an image released by the family Tuesday

Matanda-Moyo was forced to issue an unusual statement after weeks of rumours and an online publication claiming that her husband a retired General was on his deathbed.

The then senior army officer turned into an overnight celebrity after announcing the military coup which brought to a dramatic end long-time ruler Robert Mugabe’s administration last November was.

In a passionate plea, Justice Matanda-Moyo asked the media to accord her family their privacy.

“Contrary to the said report, Dr Moyo is recuperating at home and recently attended a reunion event of St Augustine’s High School students; A school his wife is an Alumni.

“It is our humble submission that the media and individual journalists must always observe their ethical obligations and not only verify but also be sensitive to the privacy of their subjects especially on personal matters such as health.”

Matanda-Moyo said her husband is looking forward to resuming his official duties soon, adding the false report had caused her family pain.

“Such false reports as contained is the offending article have the effect of causing unnecessary pain and anxiety as well as despondence among loved ones and colleagues,” the statement said.

Moyo fell ill two months ago and has been to local and South African hospitals reportedly suffering from a kidney ailment.

Government has remained mum on his health condition until his family stepped in.