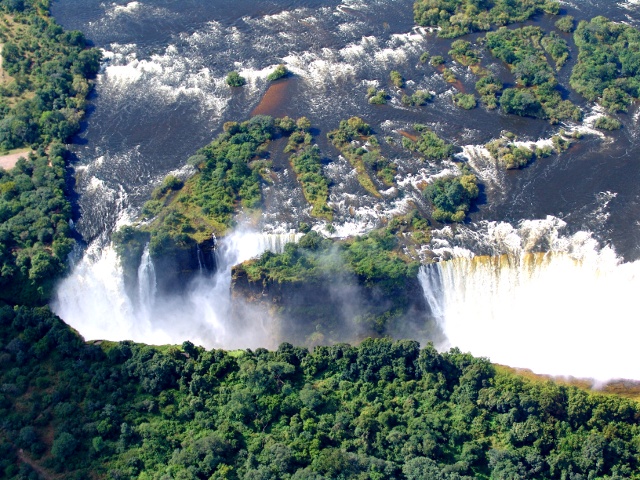 ZIMBABWE could soon approve construction of a large new tourist centre at Victoria Falls to cater to 120,000 visitors a year, officials said yesterday, as developers denied allegations that the facility will be a gaudy theme park.
The US$18 million park at the Unesco world heritage site will boast a replica Africa village and will use exhibits to tell the story of the waterfalls known locally as “Mosi oa-Tunya” (the smoke that thunders).
Earlier reports had said the government planned a Disney-style development that would include a zoo and several hotels to cater for many Zimbabweans who struggle to afford the current upmarket accommodation on offer.
“It will be a giant village, African in design and style, showcasing village scenes, traditional customs and history,” Dave Glynn, chairman of the developers Africa Albida Tourism, told AFP.
“We are not building a zoo. We are not going to have animals in display cages. And this is not a theme park. This is strictly to tell the story of Victoria Falls.”

The 32-hectare park will have historical, cultural, wildlife and entertainment sections.
“It will portray the story of Victoria Falls from the very beginning four million years ago through history, people, plants and wildlife,” Glynn said.
“We have two dinosaur species that are significant in the global dinosaur story.”
“The conservation awareness project is to help reverse the terrifying rate of extinction of animal and bird species.”
The park is expected to open in 2017 and employ 150 people.
“We received the Santonga Project concept paper and approved it as a development project,” Victoria Falls town clerk Christopher Dude said in a statement.
The park is now awaiting final approval after an environmental impact study.
Victoria Falls, on the border of Zimbabwe and Zambia, are more than two-kilometre wide as the Zambezi River plunges down a series of gorges and raises a mist that can be seen more than 20 kilometres away.Advertisement