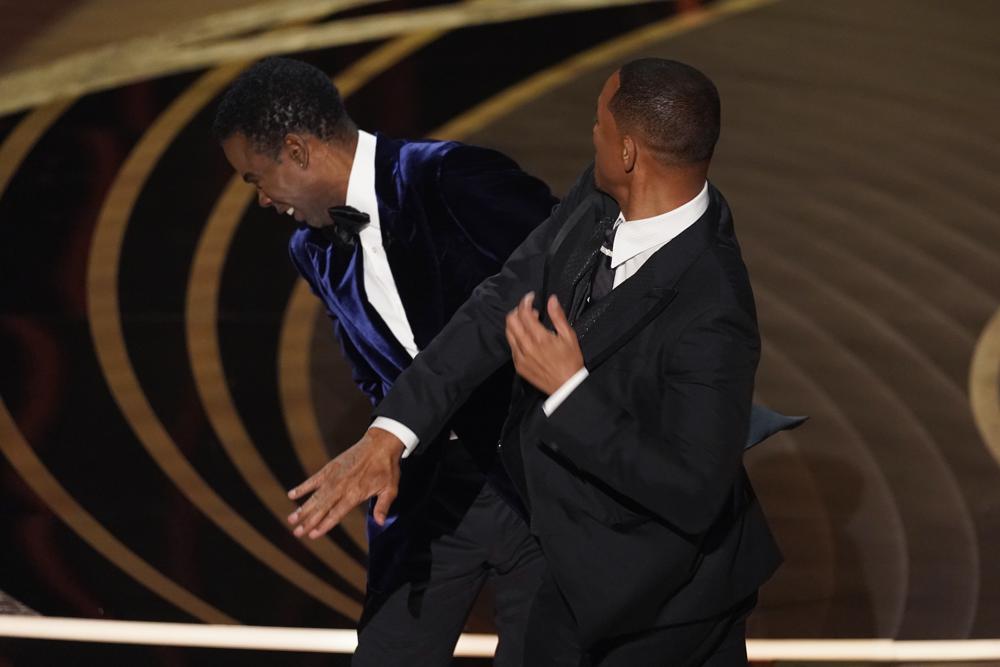 LOS ANGELES: The day after slapping Chris Rock on the Oscars stage and upending the 94th Academy Awards, Will Smith issued an apology to the comedian, to the academy and to viewers at home, saying he was “out of line” and that his actions are “not indicative of the man I want to be.”

The fallout from Smith’s actions during Sunday’s ceremony continued Monday as Hollywood and the public continued to wrestle with a moment that stunned the Dolby Theatre crowd and viewers at home. The Academy of Motion Pictures Arts and Sciences condemned Smith striking Rock, who had made a joke about his wife, Jada Pinkett Smith, and said it would launch an inquiry.

Later in the day, Smith gave a stronger apology than he did in his best actor acceptance speech, which notably hadn’t included an apology to Rock.

“Violence in all of its forms is poisonous and destructive,” said Smith in a statement issued by his publicist and posted on Instagram. “My behavior at last night’s Academy Awards was unacceptable and inexcusable. Jokes at my expense are a part of the job, but a joke about Jada’s medical condition was too much for me to bear and I reacted emotionally. I would like to publicly apologize to you, Chris. I was out of line and I was wrong. I am embarrassed and my actions were not indicative of the man I want to be. There is no place for violence in a world of love and kindness.”

The 53-year-old actor added apologies to the film academy, producers of the telecast, attendees, viewers and the Williams family. Smith was honored Sunday for his role as Richard Williams, father of Venus and Serena, in “King Richard.”

“I am a work in progress,” added Smith. 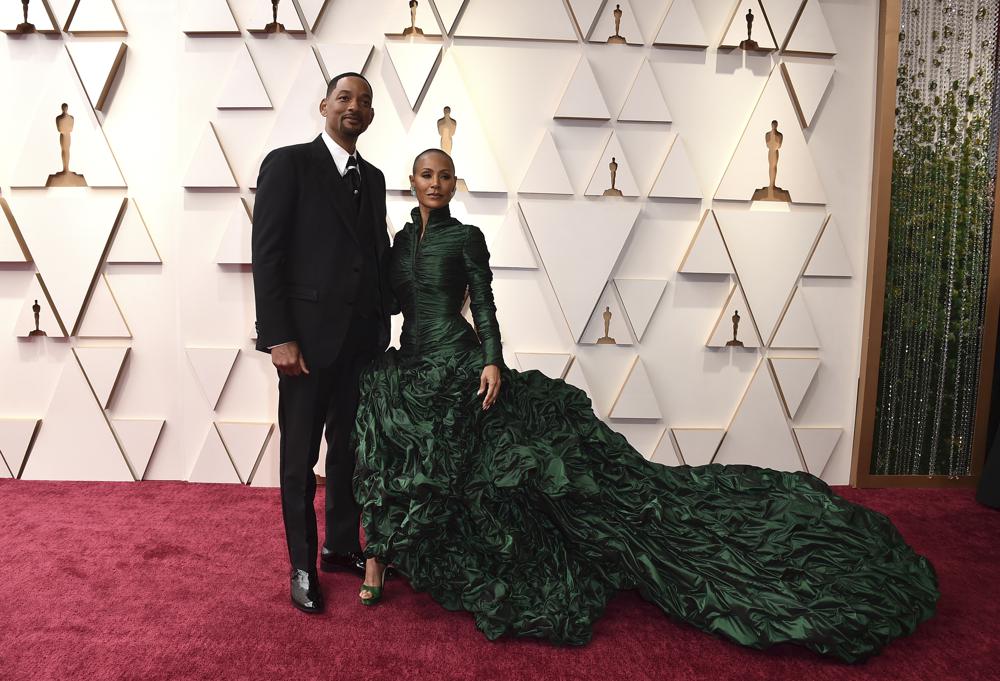 Will Smith, left, and Jada Pinkett Smith arrive at the Oscars on Sunday

After calling a board of governors meeting Monday to discuss the incident, the film academy said that it review Smith’s actions and “will explore further action and consequences in accordance with our bylaws, standards of conduct and California law.” The Los Angeles Police Department said Sunday it was aware of the incident but was not pursuing an investigation because the person involved declined to file a police report.

Smith shocked the Dolby Theatre crowd and viewers at home when he took the stage after Rock, appearing as a presenter, joked: “Jada, I love you. ‘G.I. Jane 2,’ can’t wait to see it.”

The joke touched a nerve. Pinkett Smith, whose head is shaved, has spoken publicly about her alopecia diagnosis. Smith strode on stage and slapped Rock across the face. Back in his seat, Smith twice shouted for Rock to “get my wife’s name out your (expletive) mouth.” His words echoed clearly throughout the Dolby, though broadcaster ABC cut the audio for about 15 seconds. Within an hour, Smith won best actor, receiving a standing ovation. During his five-minute acceptance speech, Smith spoke about defending his family. He also apologized to the academy.

Rock’s joke wasn’t part of his routine during the rehearsals leading up to the show, according to two sources close to production who were not authorized to speak publicly.

But Rock had joked about Pinkett Smith before. He hosted the 2016 Oscars, when some were boycotting the ceremony over the #OscarsSoWhite group of nominees, including the Smiths. Said Rock then: “Jada boycotting the Oscars is like me boycotting Rihanna’s panties. I wasn’t invited.”

Smith’s actions rattled a pivotal Oscar ceremony. Until that moment, producer Will Packer had steered an orderly and lighthearted telecast that the academy hoped would restore the Academy Awards following last year’s record-low ratings. Sunday’s ceremony reached an estimated 15.36 million viewers, according to preliminary Nielsen company numbers Monday. While a marked improvement over the 9.85 million that watched last year, it was still the second-least viewed Oscars. 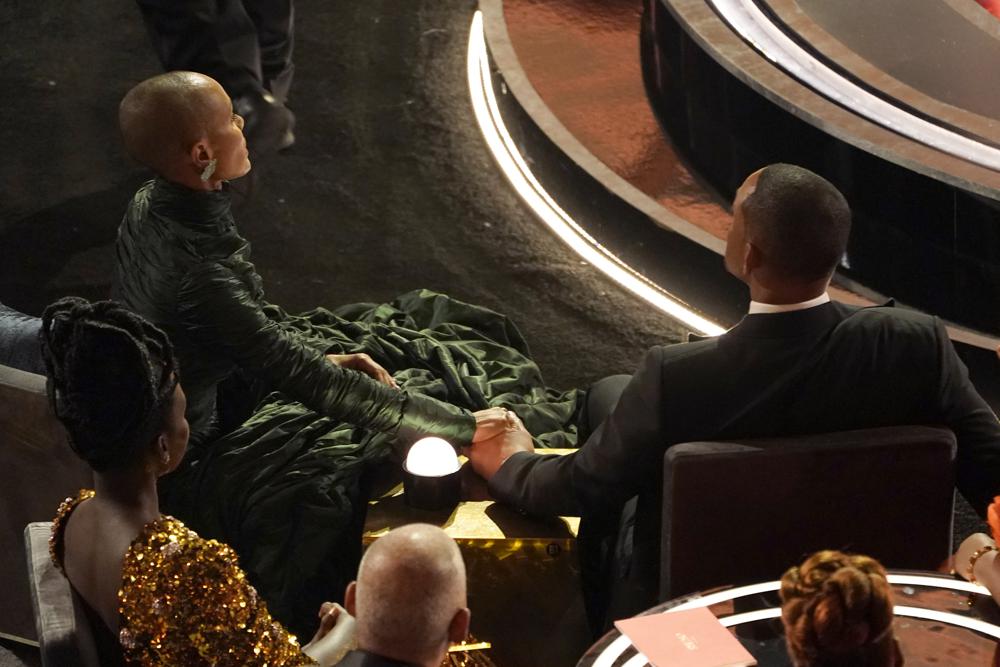 Jada Pinkett Smith, left, and Will Smith hold hands in the audience at the Oscars on Sunday

Some academy members, like writer-producer Marshall Herskovitz, called for the academy to take disciplinary action against Smith.

“He disgraced our entire community tonight,” wrote Herskovitz on Twitter.

Whoopi Goldberg, a member of the Academy’s board of governors, said Monday on “The View”: “We’re not going to take that Oscar from him. There will be consequences, I’m sure.”

The Screen Actors Guild also weighed in. The film, television and radio union called the incident “unacceptable.” SAG said that it had been in contact with the academy and ABC, and it doesn’t comment on the guild’s own disciplinary process.

A sense of disbelief hung in the air at the Dolby Theatre after Smith’s assault. Not only was it a hard-to-fathom break with decorum on live national television — an incident so dramatic, even movie-like, that many initially assumed it was a staged bit — it seemed wildly out of character for one of Hollywood’s most relentlessly upbeat stars. And it came less than an hour before Smith reached possibly the pinnacle of his career, winning his first Oscar, for best actor.

“In a way, I feel bad for Will Smith, too, because I think he let his emotions get the better of him, and this should have been one of the great nights of his life,” said former Oscar host Jimmy Kimmel on Bill Simmons’ podcast. “And now it’s not. Was there anyone who didn’t like Will Smith an hour ago in the world? Like no one, right? Now he doesn’t have a single comedian friend — that’s for sure.”

Some questioned whether Smith should have been allowed to continue to sit front and center after smacking Rock. Several stars rushed to counsel and calm Smith, including Denzel Washington, Bradley Cooper and Tyler Perry. But the timing was intensely awkward because the best actor category was due up soon after, and Smith had long been considered a lock for the award.

“I know we’re all still processing, but the way casual violence was normalized tonight by a collective national audience will have consequences that we can’t even fathom in the moment,” wrote Janai Nelson, president and director-counsel of the NAACP Legal Defense Fund, on Twitter.

The drama overshadowed some historical wins at an Oscars. The deaf family drama “CODA” became the first film with a largely deaf cast to win best picture. For the first time, a streaming service, Apple TV+, took Hollywood’s top honor, signaling a profound shift in Hollywood and in moviegoing. Wins for Ariana DeBose of “West Side Story,” Troy Kotsur of “CODA” and Jane Campion, director of “The Power of the Dog,” all had made history.

Others came to Smith’s defense, including Tiffany Haddish, who co-starred with Pinkett Smith in “Girls Trip.”

“Maybe the world might not like how it went down, but for me, it was the most beautiful thing I’ve ever seen because it made me believe that there are still men out there that love and care about their women, their wives,” Haddish told People magazine.

After the show, Smith posed for photographs with his family outside the Vanity Fair party. Inside, cell phone videos captured him dancing to “Gettin’ Jiggy Wit It” while clutching his Oscar. Their son Jaden tweeted: “And That’s How We Do It.” On Instagram, Smith posted: “Me ’n Jada Pinkett Smith got all dressed up to choose chaos.”