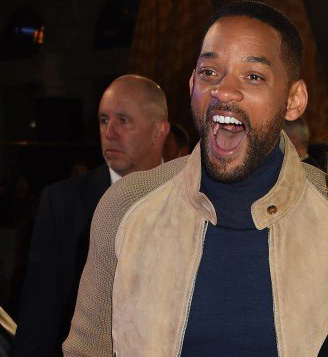 HOLLYWOOD star, Will Smith, has teased that he may end his 10-year hiatus and releases some new music.
The 46-year-old Independence Day actor has been in the studio with Kanye West and has even been taking tips from his 16-year-old son Jaden. His last solo album was Lost And Found in 2005.
“I went into the studio with Kanye. I’m thinking about it. I’m exploring,” he said at a special screening of his new film, Focus, in London.
“I’m not sure what I’m going to do yet but I’m exploring. I’m in a creative ceiling. My son tells me I have to write out the things I don’t like.
“I can’t write and stop; I have to keep going and going and write them out. I’ve never worked like that before but I think I might give that a shot.”
Smith, who braved the chilly temperatures in a navy polo-neck, tan suede jacket and tweed trousers, stars alongside Australian actress Margot Robbie – dressed in a monochrome trouser suit by Blumarine and a black Alexander McQueen coat – in Focus. The pair showed off sleight-of-hand tricks on the red carpet outside the Vue cinema in London’s Leicester Square.

He told how his wife, Jada Pinkett-Smith, whipped him into shape once she found out about his co-star.
“Jada saw Margot and she said “You’re going to the gym right now. You need to be in shape. Do not walk on set with that girl and embarrass me’,” he admitted.
“So we went to the gym and we trained a lot. I got it together and I think it turned out OK. When you’re on camera with Margot Robbie, you’ve got to have it all the way together.”
The Fresh Prince Of Bel-Air star, who portrays a seasoned conman with Robbie as his protégé and love interest in the heist comedy-drama, joked about how some of their intimate scenes had to be edited, because “there was a whole lot of sexiness going on”.
The pair are to reunite for DC Comics’ superhero movie Suicide Squad, where Smith will play assassin Deadshot and Robbie as villainess Harley Quinn.
“You can’t buy chemistry. She is fantastic. She’s 24 years old, bright and excited and that energy is really inspiring,” Smith said.
“We have that chemistry on camera despite me being 46 and her significantly younger.”Advertisement

Robbie, who previously starred opposite Leonardo DiCaprio in The Wolf Of Wall Street, had only compliments for her co-star.
“He was wonderful. He’s got this incredible energy and it’s quite infectious. He’s quite the perfect person to be around on set. It was fun,” she said.
Focus, written and directed by Crazy, Stupid Love film-makers Glenn Ficarra and John Requa, opens in UK cinemas on February 27.