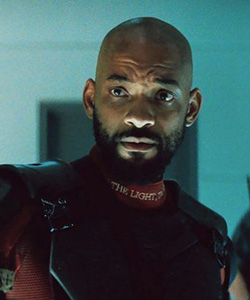 THERE’S no question that Will Smith has had a varied and impressive movie career, but was it a good move to choose ‘Suicide Squad’ over ‘Independence Day: Resurgence’?
Sure, he’s appeared in plenty of movies from ‘Ali’, to ‘I, Robot’, to ‘The Pursuit of Happyness’, to ‘Men in Black’ but his decision to snub a return to the alien invading world of Roland Emmerich’s sci-fi action surprised many. Instead he opted to join DC’s roster in the ‘Suicide Squad’ ensemble.
Speaking to Entertainment Weekly, Smith shared his thoughts on what he saw as the best move for his career.
“I had the two screenplays in front of me for ‘Independence Day 2’ and for ‘Suicide Squad’. I had to choose between the two of those. Even the choice of going to ‘Suicide Squad’ — nothing about the qualities of the movie — but the choice of trying to go forward versus clinging and clawing backwards. I do want to aggressively go forward and do new things and create and hopefully be able to stumble upon a new heyday.”

So it seems Smith was keen to try new things rather than return to old, familiar roles, even if it might’ve not have been what he really wanted – only he knows.
As it turns out, neither film was particularly well received – ‘ID42’ bombed at the box office when it limped out of cinemas with a $390 million haul from a $165 million budget. ‘Suicide Squad’, however, made a more solid $746 million from its $175 million budget. With films often needing to recoup double its budget in ticket sales just to break even, we can see that ‘Suicide Squad’ clearly outperformed ‘ID42’.
The question is, would either have done better or worse if Smith had or hadn’t been in them? One thing’s for sure: if he’d reprised his ‘Independence Day’ role alongside Jeff Goldblum it would have certainly added a more interesting dynamic to proceedings.Advertisement

However, it’s worth noting that Smith said he’s in favour of branching out to new things… but has already signed up to do prequels ‘Bay Boys for Life’ and ‘Bad Boys 4’. Whatever floats your boat, Big Willie!