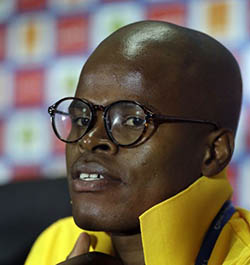 SOUTH Africa: Kaizer Chiefs midfielder Willard Katsande has given Chippa United their dues ahead of their Absa Premiership meeting in midweek.
Chiefs return to Port Elizabeth this week as they visit the Chilli Boys for a mid-table league encounter at the Nelson Mandela Bay Stadium on Wednesday evening.
The two sides met at the same venue four weeks ago, when Amakhosi walked away 1-0 victors to advance to the Telkom Knockout semi-finals.
However, Katsande has stressed that the previous result is now “water under the bridge” as he targets three points in front of a vibrant crowd in the Friendly City.
“Chippa is a quality team, and it’s always nice to play them, because they play fantastic football,” said the Zimbabwean enforcer.
“Also, as Kaizer Chiefs, we draw a huge crowd in PE, so I think it’s going to be a good game for the fans and for us as well.
“The bottom line is we will try to go there and collect maximum points. Whatever happened in terms of winning the cup game is now under the bridge because we are out of the cup.”
He added: “Now we are going there in one mind, which is to grind the result and take maximum points.”
Chippa and Chiefs currently occupy seventh and sixth spots respectively, and are seperated only by goal difference as both sides have accumulated 16 points from 12 matches.
They are also evenly matched in terms of league results, with each having won three, drawn seven and lost two thus far.