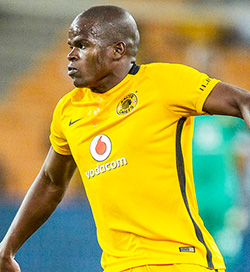 SOUTH Africa: Kaizer Chiefs midfield anchor Willard Katsande was happy to score again but wants his team to work on certain aspects they need to improve.
Katsande is Amakhosi’s joint top scorer this season next to Siphiwe Tshabalala after both netted their fourth goals in the 2-1 win at Maritzburg United on Saturday night.
“Thank God for everything because it’s not all about me, but it’s all about the team,” he said on SuperSport TV.
“We’ve been training with set-plays, and I’m happy that we converted one. Sometimes games are won on set-plays.
“We kept on going and if you check the statistics, it never favours us when we play here against Maritzburg but today at least we turned the corner and hopefully we can compete for the league.”
The Zimbabean hardman explained what he think has been the difference between the team now and when they were going through a bad slump last year.
“Those games we lost and we drew, it was a matter of converting chances, but now for the past four games we managed to convert our chances,” he said.
“And also we need to work on our defending, and also to manage the game especially when we are leading because it’s becoming a problem to us. When we are leading we slip a bit then we concede and we put the team back in the game.
“If you catch the throat, don’t remove the knife, you just need to kill it.
“So I think we’re going to go back to the drawing board and try to rectify it so that it will be a polished diamond.”