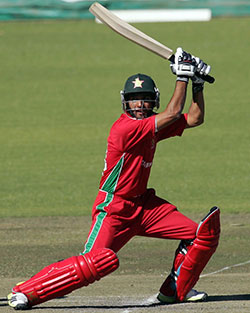 Zimbabwe 227 for 4 (Williams 70, Taylor 43, Raza 42*) beat Afghanistan 223 for 9 (Shenwari 65, Nabi 54, Chatara 2-37) by six wickets
A QUICK-FIRE 70 at more than a run a ball from Sean Williams lifted Zimbabwe to a comfortable six-wicket win over Afghanistan in the first one day international at Queens Sports Club in Bulawayo on Friday.
Williams, who blasted eight fours and a six off his 65 balls, fell just before the target of 224 was reached by the home side as they raced to victory with 28 balls to spare in the first ever meeting between the two nations.
Zimbabwe won the toss and elected to field, restricting their tourists to 223 for nine in their 50 overs, with Samiullah Shenwari top-scoring for the visitors with a patient 65 from 85 balls.
Captain Mohammad Nabi (55) and opener Noor Ali Zadran (43) also made good contributions, but the Afghans were not helped by three run outs in their innings.
Pick of the home bowlers was seamer Tendai Chatara who collected two for 37 in his eight overs.
Zimbabwe were always up with the run rate and besides Williams, captain Brandon Taylor chipped in with 43 and opener Sikandar Raza 42 not out after he had left the field retired hurt, only to return later in the innings.
The second match is at the same venue on Sunday.