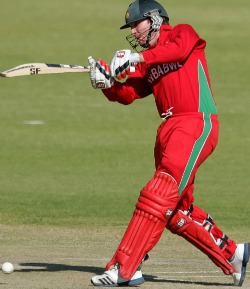 Zimbabwe 253 for 4 (Wiliams 77*, Sibanda 49, Shafiul 2-51) beat Bangladesh 252 for 9 (Razzak 53*, Chigumbura 3-39) by six wickets
SEAN Williams hit a career-best 78 not out as Zimbabwe beat Bangladesh by six wickets in the second one-day international in Bulawayo on Sunday to set up a series decider.
Playing in only his second one-day match since the 2011 World Cup, Williams was aided by Malcolm Waller’s unbeaten 39 as he calmly saw Zimbabwe to their target of 253 with 13 balls to spare.
Abdur Razzak’s maiden half-century in international cricket had hauled Bangladesh to a competitive total as Zimbabwe were made to regret four dropped catches, but Williams’ sensible batting won the day and squared the three-match series at one apiece.
Razzak arrived at the crease with the tourists struggling on 185 for seven in the 44th over after they had been asked to bat first, and duly clubbed a 21-ball fifty to take them to 252 for nine.
The 30-year-old’s previous highest score in ODIs was 35, but the left-hander made the most of a dropped catch to give Bangladesh the impetus at the halfway stage of the match.
Kyle Jarvis was responsible for the drop off his own bowling, and suffered the consequences as he conceded two of Razzak’s five sixes – and 17 runs off the final over of the innings.
“Guys weren’t too happy with the last two or three overs,” said Waller.
“We were looking at about 220 and they ended up getting 252, although that was about par on this wicket so we knew that if we batted properly we should get across the line.”
Vusi Sibanda returned to form with a solid 49 as Zimbabwe made a confident start to their chase, while Sikandar Raza and Brendan Taylor also contributed without going on to a big score.
Taylor’s 73-run partnership with Williams stabilised the innings after Zimbabwe lost both Sibanda and Raza with the score on 94, but when Taylor gifted his wicket away for 37 the match was still in the balance.
However Williams moved to his half-century and took on the bulk of the scoring duties while Waller found his feet, and the pair went on to add the remaining 85 runs needed for victory without any unnecessary drama.
“I’m ecstatic,” said Williams, who was named man of the match. “It was tough to lose a few wickets and they had us under the crunch, so I had to keep my composure and bat through the whole innings, which worked out really well for me in the end.”Advertisement

Bangladesh captain Mushfiqur Rahim said his team’s total was around 30 runs short.
“We did not bat well, a couple of guys got starts. 270-280 would have been a better total,” he said.
“At one stage we were looking at 180 all out, but all credit to Razzak. We took a few wickets, but did not bowl well throughout.”
Bangladesh won the first match of the series by 121 runs on Saturday.
The third and final match of the series is at the same Queen’s Club venue on Wednesday.