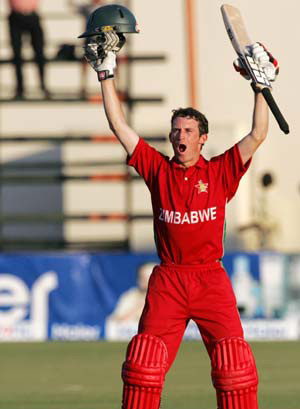 “I’M NERVOUS,” grins Zimbabwean all-rounder Sean Williams when asked about his wedding, scheduled in April after the conclusion of the 2015 ICC World Cup, before joking: “That’s why I came here.”
In Christchurch, where Zimbabwe are based for their pre-tournament warm-up matches, the excitement is palpable on Williams’ face when he talks of being back with his team-mates in what he terms a transformed environment under a new administration and coach Dav Whatmore.
Williams is thrilled to be back in the squad after being dropped in October following a public argument with then head coach Stephen Mangongo, but there is a tinge of hurt when he talks of the incident that reportedly led to his exclusion from the squad that went to Bangladesh.
He did not receive any word from the selectors as to why he was dropped and admits to have been in a ‘difficult’ phase when out of the national team.
“I got dropped, surprisingly to me, and then I went home and played franchise cricket,” says Williams.
“I did well and was still ignored for reasons unknown. I didn’t ask why. I just carried on playing and then the coach obviously changed, and I was called straight back into the squad. No questions asked. Nothing. It was extremely annoying [to be left out].”
Sitting at home watching his team-mates struggle in Bangladesh, where they were beaten 3-0 in Tests and 5-0 in ODIs, added to Williams’ frustration.
“I was watching the Bangladeshi left-arm spinners doing what they were doing,” he said.
“I had a reasonable series against Australia and South Africa, and I’d played in Bangladesh often enough and seemed to do well enough over there, so yeah, I was not happy at all to be left out.
“There was nothing I could do, it was out of my hands. I had to keep quiet and move on.”
Moving on meant looking elsewhere for opportunities as a professional cricketer – a path that several Zimbabweans have taken over the last decade or so against the backdrop of financial instability.
Williams has spoken of his commitment to Zimbabwean cricket before – in particular after he had made himself unavailable for a Test against Pakistan in 2013 – but after the argument with Mangongo and being overlooked for the tour of Bangladesh he was faced with a new challenge.Advertisement

“I was supposed to have a disciplinary hearing because I missed work due to a family illness, and I’d applied for leave and gone. I ended up having a fight with the coach, face to face in front of everybody, which wasn’t great,” he says.
“In the long run, it was going to be a decision about securing my future. At that stage when I’d gone home and made runs and taken wickets, and they [the selectors] didn’t consider me for the one-day games, I had to literally think of packing up and going to live in another country; starting afresh.