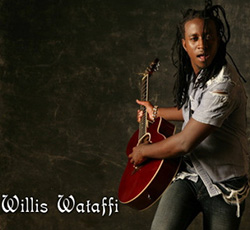 AFTER having sworn that he was headed elsewhere and would not contemplate reunifying Afrika Revenge brand, Willis Watafi has made an about-turn with the prolific Afro-Jazz music outfit coming back together to the delight of their fans.
But Willis says he didn’t sell their fans a fudge but merely looked at a good deal that they hope will help rekindle the glory days with his erstwhile singing partner Mehluli Moyo.
“We came to a compromise and to be honest we both made some painful personal compromises but at the end of the day we saw eye-to-eye and had to come together for the sake of our creativity, our careers, and also for the fans,” said Willis.
And to mark the occasion, the duo staged a remarkable show at the Book Café in Harare, which delighted fans who thronged the petit venue and were unsure what they would be confronted with almost a decade after the energetic ‘Wanga’ hit-makers went their separate ways in acrimonious circumstances.
The performances were on point that one would be forgiven to think they had only blinked and seen the duo continue from where they left off years ago.
Of course, perhaps a pork chop or two too many has left Taz rather on the bulky side, slowing down his energy. He certainly has to lose weight to regain his stamina of old. But the magic of his voice is as strong as it was a decade ago.
Having kept going with his immeasurably magical track Idolo Phansi, which cracked and exploded on the music charts, it is no surprise that the voice that serenaded crowds from way back when is still the voice to beat in town.
However, the duo would not be drawn to comment on exactly what drove a wedge between them, and what new concessions rekindled their romance.
There was certainly a time in the past when the two would definitely not have even shaken hands in heaven in the afterlife if they were to make it there. Now they have kissed and made up.
“We both had a sizeable something to lose by coming together,” said Wilis.
“We both had decent personal plans and solo projects going but we are a better team together and at the end of it all we also happen to be friends and that is as good enough a bond one needs in order to form a perfect professional partnership in the arts.”
He added: “When I said we would not come back together again, it was before the new ground-breaking developments.”
And as the duo gets back onto the live show circuit, fans can also look forward to a fresh album that the two will, no doubt, drop to cement this new era in Qaya Music, their brand which got them to the pinnacle of music-making and performance, making them cult icons to their legion of fans.Advertisement