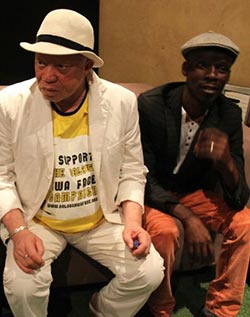 MUSIC sensation Wilbroad Muponda, aka Willom Tight has just released another scorcher – this time an international album entitled “Manifesto” that features one of Africa’s most celebrated musicians, Salif Keita.
On the album that carries 15-tracks, Tight’s collaboration with Keita who is also affectionately known as “Mansa of Mali”  is entitled “African Paradox” which has been selected as the main song for an international movie/documentary which is scheduled to debut in March 2014.
Some of the tracks from the upcoming album include “Ndewangu – Ndoni Yamanzi”, “Imi Munosara Naani”, “Africa”, “Mvura Naya Naya” and “Summer Love” among others.
Tight recently re-signed a contract with Shamiso Music and Entertainment, a South African based multimedia group to manage his music.
According to Gilbert Muvavarirwa CEO of Shamiso Music and Entertainment the collaboration with Keita came after Muvararirwa managed to broker a meeting with the African music legend.
Before Keita could meet with Muvavarirwa he insisted on listening to the whole album before he could even entertain the thought of collaborating with an unknown artist, Muvararirwa said.
“Upon listening to Willom Tight’s album, Salif Keita then requested for an urgent meeting and expressed his interests in participating in the project. Willom Tight and Salif Keita recorded the song “African Paradox” at Shamiso Music and Entertainment recording studios in South Africa. Salif Keita was so impressed with the outcome of the recording session and expressed his intention of future collaborations with Willom Tight,” Muvavarirwa said.
Muvavarirwa added that this collaboration with Keita was testimony that Tight has managed to make his way into the international music scene.
“The collaboration with Keita is the final confirmation that Tight has finally broken into the international music industry, as well as the song being selected as the main song for an international movie/documentary,” Muvavarirwa added.
“The Manifesto project will, among other things, introduce Tight to the international community. This album, as its name suggests, is a published verbal declaration of his intentions, motives, or views pertaining to his career.”
Tight made waves on the local scene with the album “Ndinoda Wangu” in 2000 before releasing another scorcher Hodzeko in 2003, both under Shamiso Music and Entertainment. He was to part ways with the company and went on to record Kuza Ngoma in 2008 and Chinyerere in 2011.Advertisement

Keïta is an afro-pop multi award winning singer-song writer from Mali.
He is unique not only because of his reputation as the “Golden Voice of Africa” but because he has albinism and is a direct descendant of the founder of the Mali Empire, Sundiata Keita.
This royal heritage meant that under the Malian caste system, he should never have become a singer, which was deemed to be a griot’s role.
Tight is set to commence shows in Zimbabwe during the festive session.
WILLOM TIGHT INTERVIEW