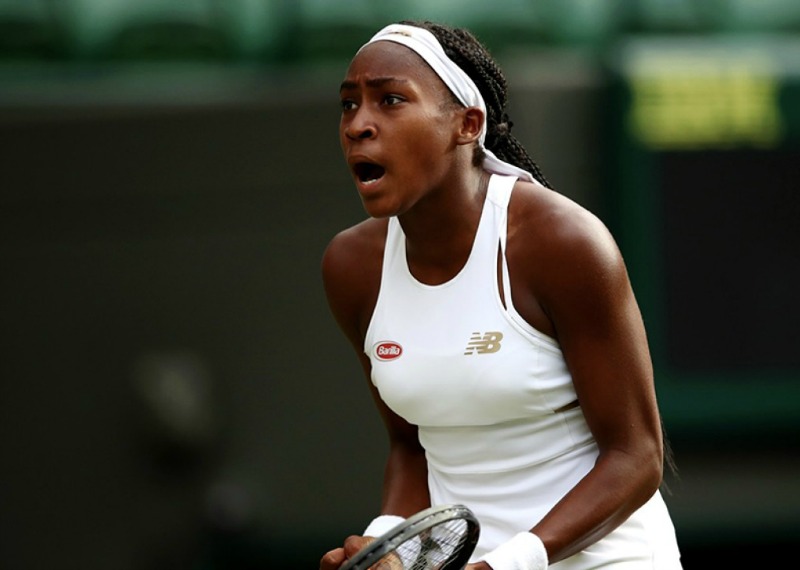 Coco Gauff’s fairytale introduction to Wimbledon continued with a second-round victory over Magdalena Rybarikova that belied her years.

“I played well on pressure points. She was serving amazing. I’ve not been able to relax, there is so much going on.

“I believe I can beat anyone across the court.”

She becomes the youngest player to reach the last 32 at Wimbledon since fellow American Jennifer Capriati, who reached the semi-finals in 1991, also aged 15.

At such a tender age, Gauff is only eligible to play 10 tournaments at professional level between her 15th and 16th birthdays yet she appears to be taking the grand occasion of Wimbledon in her stride.

Earlier on Wednesday, she had trained briefly under the gaze of 18-time Grand Slam champion Rafael Nadal before being approached for a chat by Roger Federer, an eight-time winner here, more than six hours before she finally got to play.

After a late court switch, the match finally got under way just after 20:00 BST, but Gauff looked at home straightaway against the world number 139, who reached the semi-finals at Wimbledon two years ago.

She broke 30-year-old Rybarikova’s serve to love to go 4-2 up, losing just five points on her own serve throughout the entire first set.

Rybarikova, somewhat unsettled by the crowd’s fierce support for Gauff, had her serve broken once again early in the second set.

But, showing glimpses of the form that saw her formerly become the world number 17, Rybarikova started to rally, twice defying Gauff on break point.

Yet this was always to be Gauff’s night, and she saw out the win by breaking serve once again in front of a delighted crowd and in front of her ecstatic parents Corey and Candi.

Speaking after the match Gauff revealed that she has been using social media to help relax between matches and cope with her newfound fame.

“I wasn’t expecting any of this. A lot of celebrities were messaging, posting me. I’m kind of star struck. It’s been hard to reset. I don’t know,” she said.

“Surprisingly social media kind of relaxes me before the match. That’s what I kind of do. Right now I’m going to keep everything the same because it’s been working.”

On a day for the youngsters, Felix Auger Aliassime, 18, progressed to the third round of the men’s singles by beating France’s Corentin Moutet 6-3 4-6 6-4 6-2.