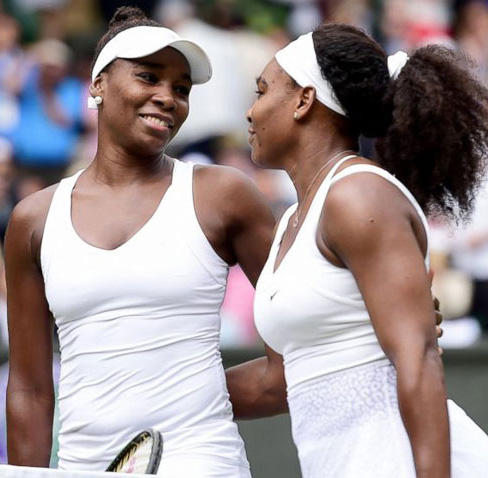 SERENA and Venus Williams on Tuesday closed in on a fifth all-sister Wimbledon final while beaten quarterfinalist Dominika Cibulkova prepared to rush back to Slovakia to get ready for her wedding.
Six-time champion Serena reached her 10th semifinal at the All England Club with a 6-4, 6-4 win over Russia 21st seed Anastasia Pavlyuchenkova.
She goes on to face Russian world number 50 Elena Vesnina on Thursday for a place in the final.
Five-time champion Venus, seeded eight, enjoyed a 7-6 (7/5), 6-2 victory over Kazakhstan’s world number 96 Yaroslava Shvedova to reach her first Wimbledon semifinal in seven years.
The 36-year-old will now face German fourth seed and Australian Open champion Angelique Kerber who reached her second Wimbledon semifinal with a 7-5, 7-6 (7/2) win over Simona Halep, the fifth seed from Romania.
Vesnina made her first semifinal at a major, by seeing off bride-to-be Cibulkova, the Slovak 19th seed, 6-2, 6-2.
“They showed Venus’s score on court and I was like ‘yaaaay’. I want her to win so bad, but not in the final if I’m there,” said defending champion Serena, who took her Grand Slam match win record to 302 – four behind Martina Navratilova’s all-time mark.
It is the 11th time that the sisters have advanced to the semifinals of the same Grand Slam event.
SERENA FEELING ACE
Serena took a 5-0 career lead over Russian 21st seed Pavlyuchenkova into Tuesday’s match, having not dropped a set to her opponent since their first meeting in 2010.
But the match was decided in the ninth game of both sets with Williams carving out the only breaks of the match against Pavlyuchenkova, playing in her first Wimbledon quarterfinal.
The American finished the match with an 11th ace.
“It was good. I am excited to be able to win and get through, it felt really good,” said Serena, who is bidding to win a record-equalling Open era 22nd Grand Slam title.
On the potential of an all-Williams final, Serena refused to get too far ahead of herself even though she has a 4-0 winning record over Vesnina.
“We don’t really talk too much about it but we are playing doubles later so we are just happy to be in the semifinals,” she said.
Venus is the oldest women’s semifinalist since Martina Navratilova in 1994.
Venus, who won the last of her seven Grand Slam titles at Wimbledon in 2008, is back in the last-four of a Grand Slam for the first time since the 2010 US Open.Advertisement

The eight-time Wimbledon finalist trails 3-2 in her five career meetings with 28-year-old Kerber, who won their only meeting on grass in the 2012 Olympics at Wimbledon.
“I love playing the game. When you are winning matches it makes it that much sweeter,” the German said.
“You can’t always have these big moments. I guess if you are Serena Williams it happens a lot, but for Venus Williams this is an awesome day.”
CIBULKOVA HEADING FOR A WEDDING
The first set tiebreak was key for Venus on Tuesday as she over-turned a 2/5 deficit before Shvedova’s game fell apart in the second set.
Kerber now has 33 match wins in 2016, joint-best with Cibulkova.
“I have had a great year so far. I think I am playing my best tennis. Hopefully I can play a few more matches here,” she said.
The 28-year-old Kerber, who also made the semifinals in 2012, came out on top in a big-hitting battle with Halep, who was a semifinalist in 2014.
Cibulkova is due to marry fiance Miso Navara in her hometown of Bratislava on Saturday – the same day as the women’s final – and the 27-year-old was willing to postpone the ceremony if she won her quarterfinal.
But 29-year-old Vesnina took advantage of a distracted display from Cibulkova to become the fifth unseeded woman to reach the All England Club semifinals since the Grand Slams switched to 32 seeds in 2001.
“Serena is one of the greatest. I always watch her matches,” said Vesnina who dropped out of the top 100 last year.
“I have to go on to the court with all my heart and take my chances.”