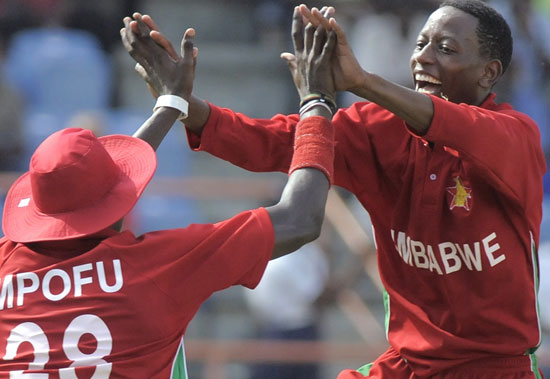 Expect West Indies to enter their next clash against Zimbabwe with their tails up.
Following on from yesterday’s comprehensive 150-run victory over Pakistan, captain Jason Holder warned that his side planned to be aggressive on Tuesday in Canberra, as they chased their second straight win of the ICC Cricket World Cup.
“Obviously we’ve gained some momentum and looking into Tuesday’s game against Zimbabwe we just want to be aggressive,” said Holder.
“I don’t think Zimbabwe should be underestimated but having said that, we’re playing some very good cricket right now so we just want to keep the momentum going through.”
West Indies came under fire following their shock four-wicket defeat to minnows Ireland in their opening game at Saxton Oval last week.
However, they hit back strongly yesterday, piling up 310 for six at Hagley Oval, with Denesh Ramdin top scoring with 51, Lendl Simmons getting 50 and Darren Bravo stroking 49, before retiring hurt.
Fast bowler Jerome Taylor then grabbed the first three wickets to fall to reduce Pakistan to one run for four wickets, a position from which they never recovered. They were bowled out for 160 off 39 overs.
“We’ve done a lot of talking over the last few days and it was actually good to see the guys came and applied themselves [and] bat the situations that we asked them to bat a little bit better,” Holder noted.
“We got starts from Bravo, we got starts from Ramdin and then it was very good to see the way the guys finished the innings.”
He added: “Jerome was excellent and I was very, very proud of him. The way he came back after obviously not bowling his best in the previous games leading up to this one, and to see the way he just came in and stuck to his task and started for us was just phenomenal.”
The win meant a lot to Holder as well. In only his second series as skipper, he had already suffered five defeats in his first six ODIs.
Victory halted his losing slump as well as the team’s and he praised his teammates for rallying around him.
“Any victory feels very good. There’s no sweeter feeling than winning,” he said.Advertisement