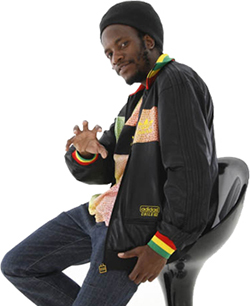 DANCEHALL king Wallace Chirimuko, popularly known as Winky D, is set to tour Australia at end of this month following the launch of his controversial latest album titled Gafa Futi Chi Extra-terrestrial a week ago.
“Award winning Zimbabwe’s Self-Proclaimed Dancehall President, Wallace Chirimuko – popularly known in music circles as Winky D, returns to Australia by public demand for performances in Melbourne, Eden Bar and Perth, Osborne Park Community Centre on 28 and 29 October respectively,” said 3T International promoting company in a statement.
The 33-year old musician left tongues wagging with his artistic garb made of a UFO mask and dress. The controversy was exacerbated by one of the album’s tracks titled Bebi RaMwari.
Extra-terrestrial refers to something alien to the earth. With a UFO mask on his head, Winky D launched the album with tracks such as Bebi RaMwari—leading some music lovers to accuse him of blasphemy.

Apart from Bebi RaMwari, the album has 12 tracks in total Happy Man, Bob Marley Funeral, Gafa Party, Twenty Five, Panorwadza Moyo (featuring Oliver Mtukudzi), Karma, Photo Life, Hooray, Mwendamberi and Daddy.
Winky D’s 2015 album Gafa Kicks Tape also stirred controversy as some music lovers felt the hit song Disappear was satanic.
Speaking through his manager Bartholomew Vera, Chirumiko promised revellers in Australia a more polished act than ever.
“We are like wine which matures with age. Australian fans should expect non-stop entertainment, as we come prepared to dish out the best.
“We will also be showcasing our latest album to be released before the Australian trip,” said Vera.
Tafara Bepete, 3T International director, said all was set for the two shows and encouraged people from all walks of life to come and witness the Zimbabwean musical icon at work.
“Winky D’s music cuts across racial and religious barriers, and all will get value for their money,” he said.
Winky D has won numerous awards, including the Best Dressed Zimdancehall artist in 2014 and Zimbabwean Song of The Year Award in 2015 for the song Disappear.
Advertisement