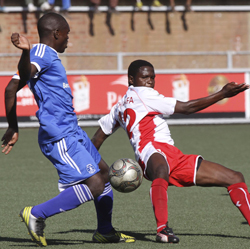 Dynamos 0-0 Triangle
DYNAMOS stretched their winless start to the season to four matches on Sunday after being held at Rufaro by Premier League newcomers Triangle.
After draws against Harare City, Black Mambas and Shabanie, the champions were left still looking for their first win on Sunday as the goalless draw sees them already eight points behind leaders FC Platinum.
Coach Callisto Pasuwa admitted they were desperate for a win, with a trip to Highlanders on Sunday to follow.

“We created all the chances we needed but we couldn’t score,” Pasuwa said after the match.
“It’s not the best of starts and we need that first win to break the ice. I have a number of injuries, but that’s no excuse. Those selected to play must do the job.”
Both teams finished with 10 men after Triangle defender Richard Kawondera was shown a second yellow card on 57 minutes, before Dynamos goalkeeper George Chigova followed him for an early shower following a forceful shove on Limited Chikafa in retaliation after being fouled.
Former Hwange striker Allan Tavarwisa made his debut for Dynamos and threatened early in the match, heading over the bar after eight minutes and also in the 35 minute.
Triangle’s David Sengu’s free-kick from just outside the box flew wide before Chikafa blew an effort after allowing Patson Jaure to clear.
The second half saw Dynamos creating and failing to take chances that fell to Thomas Magorimbo, substitute Murape Murape and burly striker Patrick Khumbula.
The result leaves Dynamos struggling with four points, eight off unbeaten leaders FC Platinum and five off second placed Highlanders.
Dynamos can pick up their first domestic win on Tuesday when they face Monomotapa in an Independence Trophy semi-final at Rufaro, while their next league opponents Highlanders face Chicken Inn in the other semi-final at Barbourfields.
The final will be played at the National Sports Stadium on Thursday.