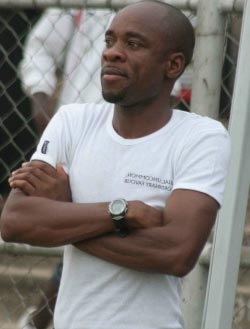 HARARE: Top-flight debutant Quality Kangadze netted a late winner as mid-table Dynamos beat Tsholotsho 1-0 to claim all three points in the Zimbabwe Premier League on Saturday.
Bottom-placed Tsholotsho had done enough to keep the Dynamos forwards at bay for much of the encounter, with goalkeeper Marion Chang impressing with a series of brilliant saves.
However, Chang was beaten on 79 minutes as Kangadze broke through the lines to score the winner and give Dynamos a third consecutive win, in the process ensuring there would be no happy return to the dugout for newly-appointed Tsholotsho coach Darlington Dodo.
Sunday Chidzambwa’s ZPC Kariba recovered their poise to halt a three-match winless streak and keep in touch with leaders Ngezi Platinum with a 3-1 triumph at home to Bantu Rovers in another Saturday encounter.
Resurgent midfielder Raphael Manuvire put the electricity men in front just after the half-hour, before Talent Chamboko doubled the home-side’s lead moments after the break.
Veteran Tawanda Munyanduri then ensured a comfortable win for Kariba, although the league’s top goalscorer Bukhosi Sibanda reduced the arrears for Bantu with his eighth of the season late on.
Kuda Musharu’s powerful second-half header was all How Mine needed to collect maximum points against derby rivals Bulawayo City.
The result allowed How Mine to keep pace with the leading pack in fifth place with 21 points from 12 matches — one behind Kariba — and coach Kevin Kaindu was particularly relieved to see his team overcome the derby blues that blighted their campaign last term.
“Last season the games that we lost a lot of points were in derbies and I am happy so far this season we have managed to pick up nine points from derbies, and slowly we are marching and trying to catch up with the leading pack,” he said.
Rahman Gumbo is another coach who went home smiling on Saturday after fifth-placed Chicken Inn’s 1-0 win over Harare City at the National Sports Stadium.
Former Hwange man Innocent Mucheneka finished off a brilliant move with a first-time strike on 28 minutes as struggling City failed to come back into the game despite creating several scoring good chances.