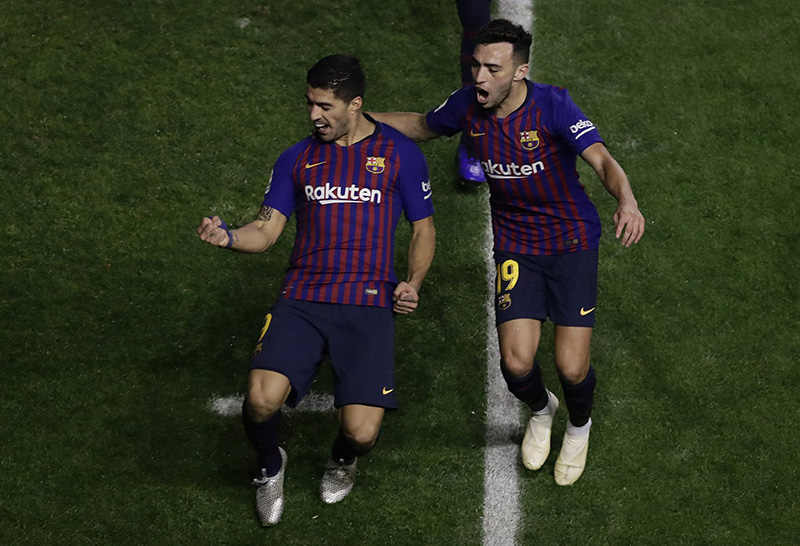 BARCELONA: Luis Suarez is making sure Barcelona keeps on winning without the injured Lionel Messi.

Suarez came to the rescue of Barcelona on Saturday with a two-goal performance that included a 90th-minute winner to cap a 3-2 comeback at Rayo Vallecano.

Suarez’s double gives him six goals for Barcelona since Messi went down with a broken right forearm on Oct. 20. He leads the Spanish league with nine goals in 11 rounds.

“The game was very difficult for us, but we knew how to turn it around,” Suarez said. “You can lose leagues at grounds like this one.”

Barcelona increased its league lead to four points over Altetico Madrid, which drew at Leganes 1-1, and Alaves. Alaves visits Eibar on Sunday.

Madrid remained seven points behind in sixth place after beating Valladolid 2-0 for its first win in six rounds in the home debut of interim coach Santiago Solari.

Suarez opened the scoring at Vallecas Stadium when he tapped in a pass from Jordi Alba, who was played clear by a long ball from Ivan Rakitic.

But the hosts swung the match in their favour when Jose Pozo scored from outside the area and substitute Alvaro Garcia put in a ball that came off the upright.

Rayo was winning until the 87th when substitute Ousmane Dembele drilled in a headed back pass by defender Gerard Pique. Suarez then scored his second goal to complete the fightback when he was left unmarked to stab in Sergi Roberto’s cross at the far post.

For a second straight game under Solari, Madrid has turned to an 18-year-old newcomer to get a much-needed victory.

Minutes after replacing Marco Asensio, Vinicius Junio showed more verve than his fellow forward by darting past a defender and unleashing a powerful shot. His strike deflected in off Valladolid defender Kiko Olivas. The league credited Vinicius with the 83rd-minute goal.

“When I received the ball, I was thinking about scoring. I counted ‘one, two, three’ and then struck it hard,” Vinicius said.

Sergio Ramos added another goal from the penalty spot with two minutes remaining after Karim Benzema was fouled by Fernando Calero.

Solari gave Vinicius his first start for Madrid on Wednesday, and the Brazil forward responded by setting up two goals to beat Melilla in the Copa del Rey. Vinicius played 12 minutes under Solari’s predecessor, Julen Lopetegui, since he joined the club this summer from Flamengo.

While some of Madrid’s players were jeered by the home fans for the team’s recent form, Vinicius received applause when he went on in the 73rd.

Solari said he told Vinicius to “take chances, to have a go at the defence.”

Antoine Griezmann scored from a free kick before Atletico conceded a late goal to draw for a third consecutive away match.

Atletico has won only one of six away matches in the league.

“We know that it is at grounds like these where league titles are decided,” Atletico midfielder Saul Niguez said. “Leganes played a good first half, but we have to be more ambitious.”

Valencia was jeered by its fans at Mestalla Stadium, with many waving white handkerchiefs to emphasize their anger at the team’s poor season, after it lost to an injury-depleted Girona 1-0.

Valencia, which finished fourth last season, is 14th after winning just once in 11 rounds.