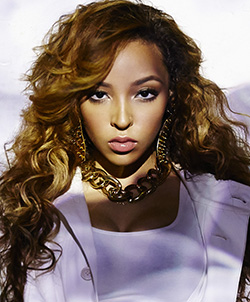 TINASHE Kachingwe seemingly came from nowhere to become a fixture on the Billboard singles charts with “2 On,” but a visit to the singer’s home reveals a long road to stardom.
A poster from her time with a childhood modelling agency hangs in one corner.
Memorabilia from Tinashe’s late ’00s stint in teen pop girl group the Stunners mingles near artwork from her mixtapes.
Overlooking her bed is a shelf housing glass trophies from years of competitive dancing — ballet, tap, jazz — and affirmations are strewn all over her room (“Don’t wait. Work” and “Imperfection is beauty,” to name two).
And then there’s the bare-bones recording studio alongside the turquoise-coloured wall, where work began on her major label debut, “Aquarius,” released Tuesday. Janet Jackson’s “Janet” rests by a computer, mixing board and keyboard, and a nearby whiteboard bares a lofty goal: “And the Grammy for best new artist goes to Tinashe” (courtesy of her 15-year-old brother).

“I’ve always had this crazy tunnel vision … the same end goal in mind, as long as I could remember,” the 21-year-old says, turning her attention to the many relics in the La Crescenta home she grew up in and which she still shares with her parents and two younger brothers.
“Even if the game plan has changed and shifted along the way.”
When Tinashe (which means “God Is With Us” in her father’s native Zimbabwe) debuted with “2 On” in January, the thumping club banger could have easily been swallowed by the mass of bouncy songs on the radio.
But the number, with its hypnotic, minimalist beat from West Coast hitmaker DJ Mustard, gained steam on urban radio as a strong entry in a song-of-the-summer race dominated by heartthrobs and rappers.
“It’s almost like it’s still taboo for a female to make a party song. It’s really strange, not like girls party any less than guys,” Tinashe says, curled up on a couch in the living room.
“That female perspective was something that was missing, and still missing for a lot of records out there.
“I can’t tell you the last time I met a female engineer, and I’ve never worked with a female producer, and that’s crazy to me.
“I want other young women to be inspired to do it. I really don’t get why there isn’t more.”Advertisement