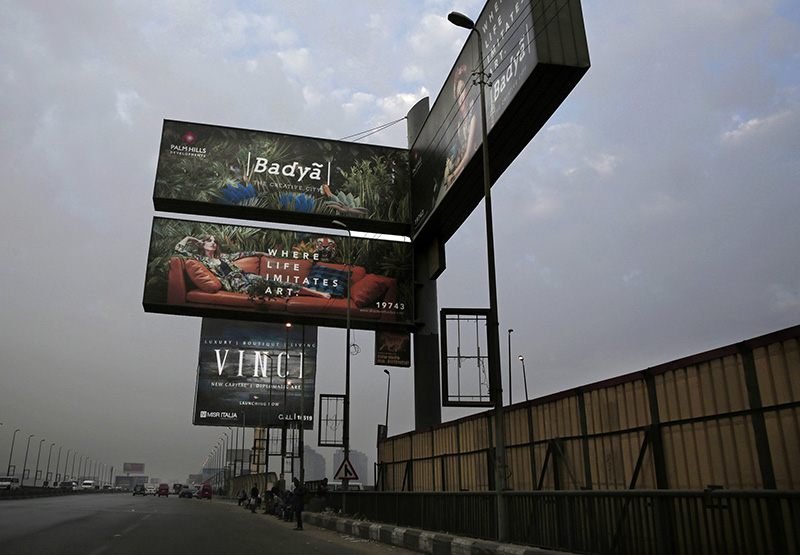 CAIRO: Billboards across Cairo advertise luxury homes with “breathtaking” views in compounds with names like “La Verde” or “Vinci” in Egypt’s new capital that is under construction in the desert, miles from the Nile-side city which has been the seat of power for more than 1,000 years.

Often, what lies behind the billboards are Cairo’s most overcrowded neighbourhoods, with shoddily built homes and dirt roads frequently inundated with sewage water.

A city of some 20 million people combining charm and squalor, Cairo may soon witness an exodus by well-heeled residents, state employees and foreign embassies to the New Administrative Capital, as the vast project in the desert is provisionally known.

It will be the latest phase in the flight of the rich, many of whom have already moved to gated communities in new suburbs, leaving the old Cairo in neglect and decay.

The new capital — a proper name has yet to be found — is the $45 billion brainchild of general-turned-president Abdel-Fattah el-Sissi, the biggest of the mega-projects he launched since taking office in 2014. He contends the projects, ranging from new roads and housing complexes to a Suez Canal expansion, attract investors and create jobs.

Senior officials boastfully compare what has been built under el-Sissi to monuments like the Giza Pyramids.

“History will do justice to this generation of Egyptians and our grandsons will remember its achievement, a wave of construction unprecedented in modern-day Egypt,” Prime Minister Mustafa Madbouly, also the housing minister, proclaimed.

Critics call the new capital a vanity project, arguing its cost could have been better put to rebuilding the wrecked economy and refurbishing Cairo.

They also see it as evidence of el-Sissi’s authoritarianism, launching a multibillion-dollar plan with little debate. El-Sissi often lashes out at those who question him, telling Egyptians to listen only to him and saying he’s answerable to God alone.

He often says Egypt’s resources are limited — leading some Egyptians, struggling amid skyrocketing prices, to wonder why so much is spent on questionable projects.

“There is something very wrong with the order of priorities,” said political analyst Hassan Nafaa. “Maybe el-Sissi wants to go down in history as the leader who built the new capital, but if Egyptians don’t see an improvement in their living conditions and services, he will be remembered as the president who destroyed what is left of the middle class.”

The government argues that Cairo is already bursting at the seams and will grow to 40 million by 2050.

The new city is being built on 170,000 acres about 28 miles east of Cairo and nearly twice its size. Construction began in 2016, and the first of its forecast 6.5 million residents are scheduled to move there next year.

The city will house the presidency, Cabinet, parliament and ministries. Planners promise a 21-mile-long public park, an airport, an opera house, a sports complex and 20 skyscrapers, including Africa’s highest, at 345 meters.

Madbouly denied the new city will only attract the well-off, saying it is “for all Egyptians.”

Prices tell a different story. The smallest apartment there — 120 square meters — is expected to cost 1.3 million Egyptian pounds ($73,000), out of reach for a mid-level bureaucrat, who may make the equivalent of about $4,800 a year.

“Those targeted to live in the new capital constitute a very, very limited segment of society,” said Nafaa.

Ironically, the new capital could one day be overwhelmed by the old, as illegal construction expands. That has often been the way Cairo has evolved, with the rich moving out, only to move again as the city swells, adding layer after layer.

“Throughout the history of Cairo, the ruling elite and the rich have failed to completely isolate themselves from the rest of the population,” said novelist Hamdy Abu Golayyel, who authored a book about the city called “Cairo, Streets and Stories.” It will take draconian laws to keep the new city distinct, he said.

No one knows how Cairo will be impacted by a new capital and the shift of the seat of power outside of the city for the first time since the Muslim conquest in the 7th Century.

Many government buildings in Cairo, for example, are palaces and mansions confiscated by the socialist government of the 1950s and 1960s. In theory, they could be renovated and turned into museums or hotels, proponents argue. But then, many such empty architectural treasures are already left to fall apart or even torn down.

The government is renovating some of Cairo’s illegally built neighbourhoods. But in one case, it razed a run-down district and moved out residents after compensating them to make way for a high-end district.

“It could be neglected, become estranged and left to die a slow death,” he said.

Sameh Abdallah Alayli, an urban planning expert, wrote in the Al-Shorouk newspaper that the idea of a new capital was unacceptable, construction should be halted and the focus put back on overhauling the ancient city.

“Historical Cairo must remain the political capital of Egypt,” he wrote.