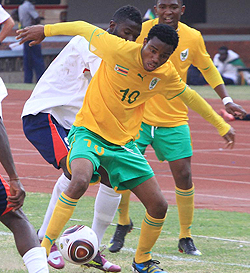 FORMER Highlanders midfielder Honour Gombami has reportedly been dumped by his second tier Belgian league side, Antwerp.
Gombami suffered a terrible injury in 2009 while turning out for Cercle Brugge in the same country and stayed for almost a year without kicking a ball. When he recovered, he never regained his form.
Antwerp’s list of registered players for the 2013/14 season shows that Gombami is no longer on the club’s books.
Meanwhile, Gombami’s former club mate at Highlanders and Cercle Brugge, Vusa Nyoni’s terrible early season for him at Mons continued over the weekend with their third straight loss in four matches after going down 0-2 to Zulte-Waregem.
Nyoni was taken out in the 46th minute for Pieter Jan Monteyne when the team was already down 0-1 through a 3rd minute Thorgan Hazard penalty who hit the target again three minutes into injury time.
OH Leuven, home to former Masvingo United player Ovidy Karuru fell 0-1 to Standard Liege to also maintain their terrible start to the Jupiler League.
The bad spell continued for Zimbabweans in Europe over the weekend as Quincy Antipas’ Denmark side Brondby were pummelled 2-5 by Midtjylland, a result that saw them drop down to bottom of the table.
Former AmaZulu strongman, Costa Nhamoinesu, was the only Zimbabwean to pick up a point after his Czech Republic side, Sparta Praha, drew 0-0 in a top of the table clash with Viktoria Plzen.
Nhamoinesu, who is commanding a first team jersey at the top side, was yellow carded in the 65th minute.
His team is second on the standings with 13 points, the same as leaders Viktoria Plzen but an inferior goal difference sees them on second spot.
There were no league games in the Absa Premiership in South Africa where the majority of Zimbabweans ply their trade while the United Arab Emirates league kicks off next month. Former Highlanders and Dynamos players Noel Kaseke and Edward Sadomba ply their trade there.Advertisement