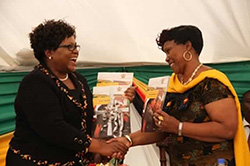 “Ngixoleleni ngemibuzo yami sengoba bengingekho” said Mzwakhe Mbuli the South African poet. “Please forgive me about asking many questions because I am not at home.” It is now the dirty linen that is informing us about the ruling party Zanu PF in Zimbabwe. We now know that Mai Mujuru did not shoot down the helicopter she purported to have shot down during the liberation struggle. We know too that Didymus Mutasa was at the periphery of the liberation struggle out of fear of losing his life in the bombings. It means the people of Zimbabwe have been made to worship falsehood for 34 years.
But these are the people at the higher echelons of the Zanu PF ruling elite. We are made to love and adore their false claims that they shot down military helicopters in the battlefields. I was not in the struggle directly myself but my parents; my dear mother and my step father Zephaniah Sihwa fought this liberation war to the bitter end. At independence in 1980 their contributions were sidelined; both died unrecognised by the powers that may be; Zanu PF.
The Didymus Mutasas of this world are shouting semi-literate political slogans on top of the mountains; now claiming to have fought the war far better than the Zipra Generals Dumiso Dabengwa; Nikita Mangena and Lookout Masuku put together; hence he (Dabengwa) does not deserve the farm he bought for himself; it must be invaded; taken away from him.
Didymus Mutasa is talking gamatox; the bio-chemical weapon against insects and now against people; he has dehumanised rivals such as Jonathan Moyo calling them weevils. He will finish the weevils with gamatox spray! This bio-chemical weapon is interchangeable; looks like it can be used to destroy insects and humans too depending on circumstances. That is Zanu PF language of communication in 2014! It remains to be seen if Moyo and others will survives this poisonous spray!
Press fast forward: lets talk about the conference regarding the women’s league in Zanu PF that ended on the 17th of August 2014; we heard Oppah Muchinguri telling them all about a woman who burnt her husband to death in the home. In response it, we were told by Hon. VP Mujuru that “some of them” are sell-outs.
Please forgive me for asking many questions because I was not there. Where do I place myself as a simple citizen in this entire mambo jumbo that took place at the Zanu women’s conference in Harare? Where my needs addressed at this women’s conference? Did they talk about the women in my area Mathebeleland North – precisely Lupane precisely; their sufferings; their dire straits? Does Oppah Muchinguri know that in Mathebeleland North there are young girls who forfeit school because they do not have simple pads to wear when they are on monthly periods? Was she told that these girls use cow dung as pads when they are on a monthly period?Advertisement