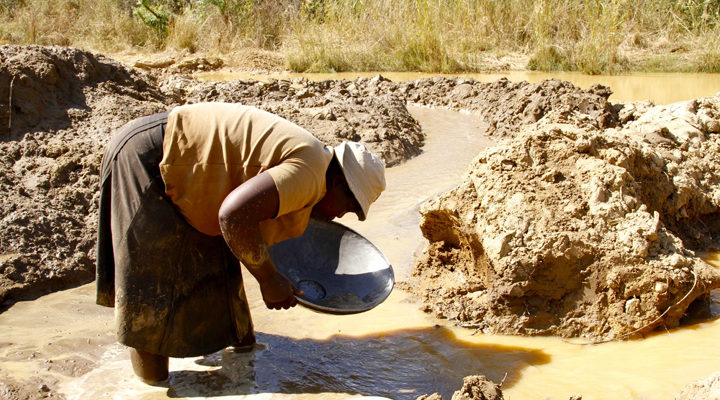 MALE artisanal miners are chasing away women who want to venture into mining gold, accusing them of making gold “disappear” mysteriously since they menstruate, a report released by the Centre for Natural Resources Governance (CNRG) last week notes.

The report titled: ‘Guns, Power and Politics Research Paper on Extractives and violence against Women in Zimbabwe, chronicles the challenges women go through when they venture into mining or live close to mines.

“Artisanal miners generally believe that women are ‘polluted’ and make gold ‘disappear’ because they menstruate,” the reports said.

“This is reinforced by other research that cites beliefs about women’s polluting capacities at mining sites leading to the exclusion of women and the violation of their right to participate in the most lucrative parts of the mining chain.

“These stigmatising beliefs about women stand in sharp contrast to beliefs about women in Zimbabwean folklore which link women to fecundity, procreation and reproduction. In precolonial Zimbabwe, women took part in mining gold, precious stones and other valuable resources.”

The report added: “The narratives of pollution emerged with the colonial culture of excluding women and banishing them to the domestic realm.

“This contradicted the Shona and Ndebele cultures in which domestic labour was historically performed by, and linked to older girls, while older women were more involved in agriculture, mining and other roles related to food production and procurement.”

The CNRG research said there was need to break the silence around violence and discrimination against females who want to venture into the lucrative mining business.

“The silences around these forms of violence need to be broken so that women can obtain the redress and justice they define for themselves. Stigmatising beliefs about women, social and cultural beliefs also work against women.”

In 2015, the CNRG said it embarked on a project to assist 52 artisanal miners to form a syndicates and acquire mining claims.

However, at the syndication stage, the CNRG noted the men were reluctant to include women in their groups.

It is also difficult and costly to secure licences, permits, leases while exclusive prospecting orders are lengthy and costly processes and sometimes political.

This, according to the CNRG presents obstacles to women’s participation in mining. Very few women own or are registered as proprietors of small-scale mines.