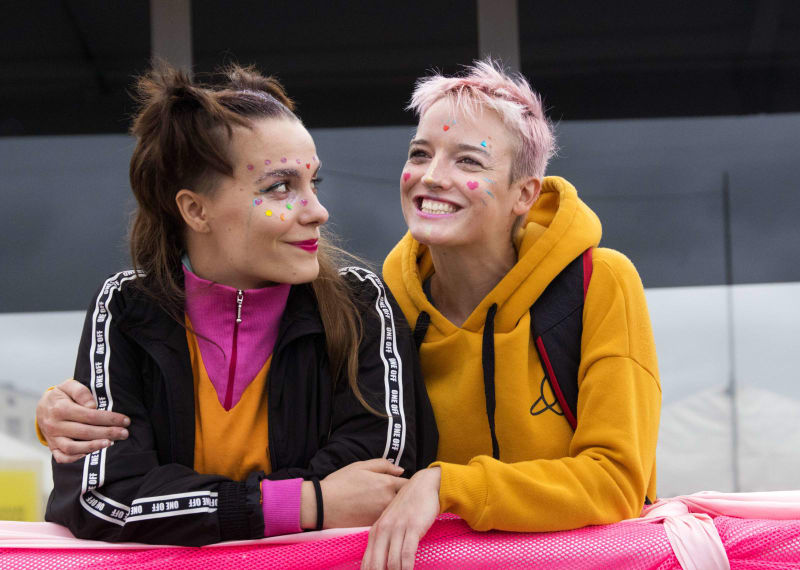 Matilda Hagerman laughs with her friends as she queues at a man-free music festival, which kicked off in Sweden on Friday in protest against a wave of sexual assaults at festivals in recent years.

“This festival was necessary because of everything that happened during festivals last year,” says the 27-year-old student with long pink hair and purple lipstick as her friends nod in agreement.

Held in Sweden’s second-largest city of Gothenburg, the two-day Statement Festival, forbids men but not transgender people. It was announced last year after police received four rape and 23 sexual assault reports at Sweden’s largest Bravalla Festival, which was cancelled this year as a result.

“What do you think about us creating an awesome festival where only non-men are welcome until ALL men learn how to behave?” Swedish comedian Emma Knyckare, who founded the Statement Festival, tweeted at the time.

Located inside an industrial building in Gothenburg’s harbour, only female bands are performing and neither male security guards nor journalists are allowed to enter.

Rebecka Ljung, spokeswoman for the festival, told AFP “thousands” of women were expected to attend the festival.

Under cloudy skies, the festival got started with women holding beers and smiling and walking harmoniously in groups.

Located inside an industrial building in Gothenburg’s harbour, only female bands are performing and neither male security guards nor journalists are allowed to enter

With two main stages for the mainly Swedish women performers, there was plenty of space to rest outside on pink coloured seats at the centre of the site, turning the festival into a convivial place in contrast to traditional festivals.

“This place feels like a safe-zone where women can just get together and have fun and celebrate … especially in light of the assaults that have happened at other festivals,” said Julia Skonneby, a 34-year-old performer.

“It feels like a certain tension is gone… we’re here to make a statement together,” Hanna Gustavsson, a 31-year-old designer, chimed in.

Statement, launched after raising more than 500,000 kronor (47,000 euros, $54,000) through crowdfunding, defines a transgender person as “a person who does not identify with the sex assigned to them at birth”.

This means transgender women born as men are allowed to attend.

Only men who identify with the sex they were born with, also called cis men, are banned.

The Scandinavian country is one of the most gender equal countries in the world.

After receiving several complaints, the Equality Ombudsman (DO), a government agency that promotes equal rights and handles discrimination complaints, has asked the festival to specify what it means by “cis men”.

“We want to examine whether the festival is compatible with discrimination laws,” the agency’s spokesman Clas Lundstedt told AFP, adding it would take a couple of weeks to reach a conclusion.

Festival-goer Gustavsson said she thought it was fair to bar men.

“I don’t believe in complete separatism but I think it’s very important to have this festival right now.”

According to the Swedish National Council for Crime Prevention, 4.1 percent of women reported that they had been the victim of a sexual crime compared to 0.6 percent of men in Sweden.

Knyckare told AFP that the MeToo wave exposing sexual assault unveiled “serious problems” in Sweden, one of the most gender equal nations in the world, at not only festivals but several institutions.

“It seems like men have woken up to how huge the problem with sexual violence is,” she told AFP.