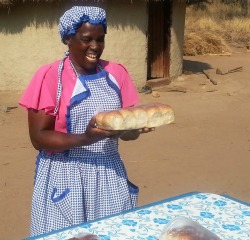 THIRTEEN ordinary women from Makonde rural in Mashonaland West province have monopolised the local confectionery markets to the extent of pushing major bakeries out of the area.
Just from a makeshift oven, the women are able to bake hundreds of loaves of bread, buns and donuts and are failing to cope with the demand for their products due to lack of resources.
A packet of 10 buns costs just a dollar compared to $1 for 4 from well-known bakeries. The women, trading under the name Batsirayi Bakery, are now able to make more than 300 buns per day and 50 donuts.
The women came together and donated one dollar each to their treasury known as Mukando (a traditional bank).
“Each woman would donate a dollar every end of the week to the group’s treasury. The money was banked into our traditional bank until we managed to buy our first 50 kg bag of flour,” leader of the group, Amai First Chiyanike, told New Zimbabwe.
She added: “In order to keep Mukando going each member is allowed to borrow from the treasury and pay back the money with a little interest. That money is subject to approval if it’s for personal income generating projects and also for paying school fees. Some of the women who have borrowed have started poultry and piggery projects.”
The women also said they often take advantage of baking time to discuss other pressing issues to do with sexual and reproductive health and the fight against the spread of HIV with the help of information from the National Aids Council (NAC).Advertisement