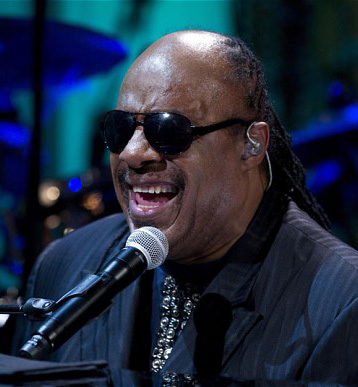 STEVIE Wonder has always blended his musical genius with social activism, and as he launched his new tour, he stayed true to form, advocating gun control, pleading for an end to racism and advocating equality for those with disabilities.
“I challenge America, I challenge the world, to let hatred go, to let racism go,” Wonder told the sold-out audience at Madison Square Garden on Thursday night. “That is the only way we will win as a nation and the world.”
Wonder’s “Songs in the Key of Life” tour was dedicated to the music from that groundbreaking double album, which included classic hits like “Sir Duke,” ”I Wish,” ”As” and “Isn’t She Lovely.”
A legendary album celebrated as much for its musicality as its message, the 1976 project won multiple Grammy Awards and further cemented Wonder’s brilliance.
The music still resonates, as Wonder proved during an electrifying concert that ran for almost three hours (including intermission) and had the audience roaring and standing on its feet in approval.
There were light-hearted moments, such as when Wonder confessed to a flub mid-song — “I forgot my own words,” he said, laughing early on.
He also dismissed recent reports that his partner is having triplets — it’s just one baby.
“I don’t know who started that bull,” he said, eliciting laughter. He then brought his infant daughter, Zaiah, onstage for a performance of “Isn’t She Lovely,” which he wrote for daughter Aisha Morris — one of his background singers — years ago.
Wonder was overcome with emotion at one point as he sang “Summer Soft,” as tears streamed down his face. A backup singer had to perform with Wonder, who was seemingly unable to find his voice.
But he was in fine form for most of the concert, playing various instruments, including harmonica, with a huge band.
He also made sure his viewpoint was heard on various issues. He had invited relatives of the victims of the Sandy Hook shooting to the concert, and acknowledged them as he advocated gun control.
“The only thing that guns do is make the gun manufacturers rich and the mortuaries richer,” he said.
He also called for the creation of better services for disabled and challenged residents in New York City.
“I want there to be accessibility for anybody who is deaf, who is a paraplegic,” he said.
Though the tour was dedicated to “Songs in the Key of Life,” Wonder included one classic song that wasn’t on that album — “Superstition.”Advertisement