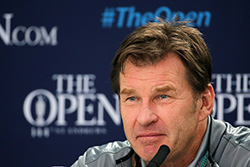 NICK Faldo says Tiger Woods’ chances of beating Jack Nicklaus’ haul of major titles ended five years ago because the American no longer strikes fear into his opponents.
Woods was the dominant force in golf for over a decade and won 14 majors between 1997 and 2008, four short of Nicklaus’ tally of 18.
However, Woods’ star has been on the wane for some time after some well-publicised private issues coincided with a downturn in form, while the 39-year-old – now ranked 311th in the world – has also endured injury problems.
He is out of action having undergone back surgery in August and Faldo believes that, with the emergence of Jordan Spieth, Rory McIlroy and Jason Day, Woods may never win another major.
“That [beating Nicklaus’ record] went five years ago, there was no way he was going to get to 19 five years ago and now it’s really, really unlikely that he’s going to win another major,” Faldo, a six-time major winner, told Omnisport.
“His next birthday is 40, for 20 years he played incredible golf from 15 to 35, and the last five years everything changed. Now he’s battling and these youngsters haven’t played against a dominant Tiger and so they’re not worried about Tiger anymore.
“It’s a tough age 40 when you’ve played that much golf. Physically and mentally, things have changed. As an athlete that’s going to happen, the hard thing about golf is that it dangles a carrot, you could still hit 65 tomorrow.
“One day Usain Bolt will get old and have the luxury of being able to retire and say ‘I’m too old for this’ and won’t run again.
“Golfers we have the torture of thinking ‘maybe tomorrow, maybe tomorrow we could play well’, and you do but the next day you don’t. It’s going to happen, as an athlete he’s going to say ‘I can’t play golf like I used to.'”
While some predicted that Woods’ decline would be bad for golf, Faldo says that the fierce battle for the world number one spot between current occupant Spieth, Day and McIlroy is exciting for the sport.
“I think Tiger was so good. Poor Ernie Els got beaten a few times, Phil Mickelson got beaten, and the odd guy challenged Tiger,” he added.
“Now there’s a dozen guys who could win majors, and they will. I said this two or three years ago that Tiger’s career is going to peter off – you’ll have to say if I want to win majors I’m going to have to beat him, him and him, because if I want to win that’s what I’ve got to do and that’s what they’re doing.Advertisement

“I think that makes golf more exciting. To get three guys as world number one this year because of playing so well, not because one guy is playing badly, that is fantastic.”