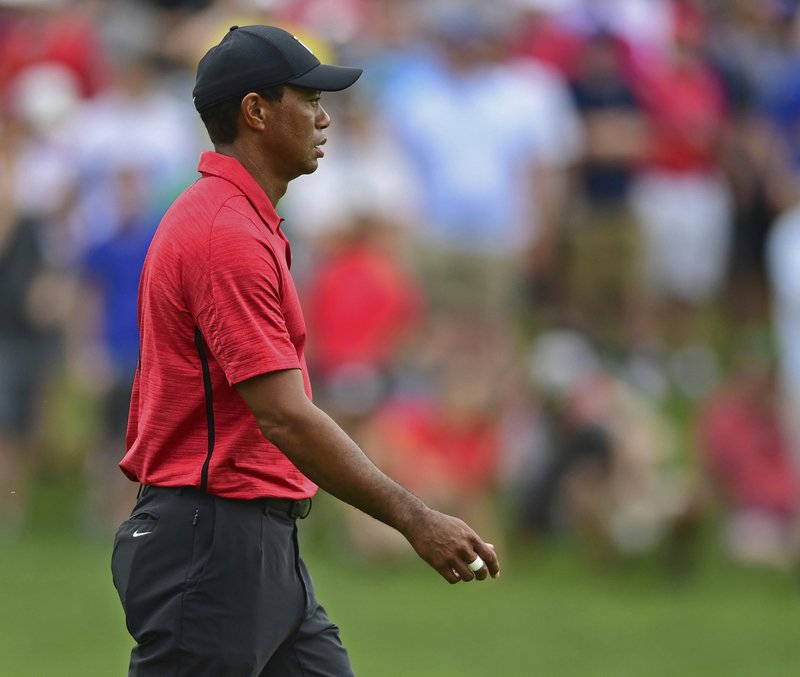 OHIO: Tiger Woods made it interesting again, but slipped from contention on the last day of a tournament.

Despite being done in by some poor putting at the Memorial, he believes there still was valuable progress.

“I keep getting a little better,” the 42-year-old Woods said after shooting an even-par 72 on Sunday at Muirfield Village. “Week in, week out, I keep getting just a little bit more fine-tuned. For instance this week, just to be able to make the slight adaptations after the first nine holes and be able to flip it around and shoot a respectable number.”

Woods started the final round five shots off the lead, the third time this year he has been within five to start the last day and couldn’t turn it into a win. Bryson DeChambeau won the event in a playoff.

Playing in the Memorial for the first time in three years, Woods birdied two of the first five holes Sunday before hitting from a fairway bunker on No. 6 to the rough in the back of the green. Still, he managed par.

He hit his approach over the green on No. 7 and settled for par again. He couldn’t make up any ground on the par-3 No. 8, either, leaving his second shot just short of the hole.

He bogeyed the par-3 No. 16 when he missed another short putt, an unfortunate trend for Woods in a week when he was hitting the ball well off the tee.

He now turns his attention to the U.S. Open in two weeks.

“I just need to hit better putts,” he said. “This week I didn’t really have, didn’t feel comfortable with my lines, and my feel was a little bit off. Consequently I missed a bunch of putts. But I hit it really good this week, so that’s a positive going into Shinnecock, where ball striking is going to be a must.”

Moving up and then falling back has become a trend for Woods in his comeback bid.

He was one shot behind going into the final round at the Valspar Championship in March and finished tied for second, a shot behind winner Paul Casey. He was five back at the Arnold Palmer Invitational the next week, but couldn’t do better than a tie for fifth, eight shots behind winner Rory McIlroy.

He knows he has to improve but is happy with his game overall, especially because before back surgery in April he didn’t know if he would ever walk again, let alone play competitive golf.

“Overall, if I just keep building on this, with how I’m hitting it right now, I’m in good shape for two weeks from now,” he said.

His participation dialed up the energy level here all week, with thousands following him on the course and roaring their approval with every good shot. The crowds were supportive and respectful all week, he said, and he tried to just appreciate being here again.

“It’s incredible to be able to play golf again at this level,” he said. “Not to have any worries about being able to walk again, like I was. I was struggling there for a while, and now I’m on the other end of the spectrum.”

DeChambeau chuckled when asked whether he was hoping Woods would make a run Sunday so they could duel it out. He answered with a firm “no.”

“To be able to have this type of caliber (of players) all chasing is kind of special,” he said. “I knew I had to go out there and play well. I couldn’t make many mistakes.”