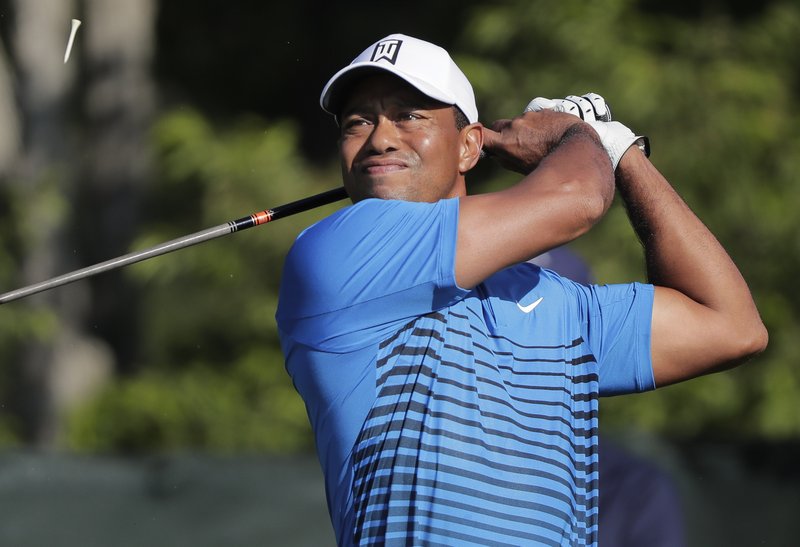 SOUTHAMPTON, N.Y: Tiger Woods returned to the U.S. Open for the first time in three years and hardly anyone noticed.

Then again, it was late Sunday afternoon. Shinnecock Hills was practically empty.

“A bizarre experience,” said Jordan Spieth, who played nine holes with him.

Such a quiet moment was rare for Woods in his celebrated return following four back surgeries. A year that began with intrigue soon gave way to hysteria over anticipation of his first victory in nearly five years.

That time has not arrived as Woods heads into the second major of the year.

“Golf is always frustrating,” Woods said Tuesday after going nine holes with Dustin Johnson and Bryson DeChambeau, winners of the last two PGA Tour events. “There’s always something that isn’t quite right, and that’s where we as players have to make adjustments. You’ve seen the tournaments I’ve played this year. There’s always something. Hopefully, this is one of those weeks where I put it all together and even it out. And we’ll see what happens.”

It has been 10 years since Woods won his last U.S. Open, his 14th and last major. All it takes for him to temper any frustrations is to look back at last year, when he didn’t know if he would even play another U.S. Open.

He was at a low point in his career and his personal life. While recovering from fusion surgery — his fourth surgery on his back in three years — he was arrested on a DUI charge and found to have a mixture of two painkillers, the sleeping aid Ambien, the anti-anxiety drug Xanax and the active ingredient for marijuana in his system. He entered a clinic to get help and pleaded guilty to a reckless driving charge that kept him out of jail.

Asked about the video of his arrest and how his life has changed, Woods replied, “It’s gotten better.”

That seems like longer than a year ago because Woods has been such an active part of the PGA Tour again. In some instances, he looks like the same Woods.

He hit one drive past Johnson on the par-5 fifth hole Tuesday that left him a 2-iron to the front of the green. He had two chances to win in March, missing a long birdie putt on the last hole in Innisbrook and hitting a drive out-of-bounds on the 16th hole at Bay Hill the following week.

But no trophies. No fist pumps.

“There’s two ways of looking at that,” Woods said. “I’ve given myself chances to win, which I didn’t know if I was ever going to do again. And then again, not happy with the fact that I didn’t win because I loved how it felt being there. … And so, yeah, I’ve had my opportunities. Also, I’m very thankful to have had those opportunities. I didn’t know if I was going to have them again.”

What kind of opportunities will Shinnecock Hills offer?

Tuesday was the busiest day of practice under a clear sky, warm weather and a course that just about everyone is raving about.

Woods played nine holes in the afternoon Sunday and Monday — a change from the days when he would sweep the dew off the grass first thing in the morning — and nine holes Tuesday morning.

And while the crowd was relatively sparse for his morning round, there is no mistaking when Woods is around.

Jason Day was on the putting green when only a few people were around. And then suddenly, there was a gathering.

“He rolls up and there’s 30 guys on the putting green, and it was hard to do your work,” Day said. “But that’s just the Tiger effect, and everyone wants to see him. Everyone wants to see what he looks like and how big he is or just see, I guess, the myth behind Tiger Woods. … It is definitely bigger, always bigger when he’s in contention on Sundays. And if he’s in contention this Sunday, then it’s going to be huge.”

Woods last played in the U.S. Open in 2015 at Chambers Bay. He was coming off the highest score of his career, an 85 in the third round at the Memorial, and never stood a chance on the course built over a former gravel pit. He shot rounds of 80-76 and was gone by the weekend, and before long, he was gone from golf with the first of his back surgeries.

Johnson returned to No. 1 in the world with his six-shot victory last week at the St. Jude Classic, the 18th of his career, all since Woods won his last U.S. Open. He replaced Justin Thomas, the PGA champion who turned 25 in April.

Woods will play with both of them when the first round begins on Thursday.

“I can see that there may be a sense of … this is the last kind of push that he needs for his career,” Day said. “But at the same time, I know that he’s still hungry. I think he’s hungry for that next win and trying to get — not the monkey off his back, because he’s done it so many times — but just coming back and competing and playing well against our generation now. And I think that’s what he’s looking forward to.”