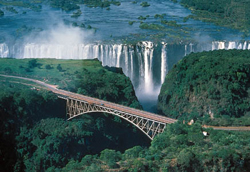 WORK at the planned $18 million historical and recreational park in the resort town of Victoria Falls by Africa Albida Tourism group is set to begin in June this year after a consultant engaged by the developer started an Environmental Impact Assessment (EIA) last week.
The Santonga Park, the biggest private investment in Zimbabwe’s tourism hub, will also house a zoo on an 80-acre piece of land close to the group’s flagship Victoria Falls Safari Lodge.
It is expected to attract up to 120,000 visitors yearly and increase the average stay of tourists in the town from three to four days.
Black Crystal Consulting has started consultations with stakeholders as part of the EIA for the proposed Santonga Project, Africa Albida said in a statement last week.
Construction will start in June this year, with the park expected to open to public in July next year, It said.
The facility will act as an education and entertainment park for visitors and locals while also complimenting tourist facilities in the resort town.
It will involve interaction and close encounters with different kinds of game and wildlife that would be caged, partly resembling the Africa Kingdom in the USA, Africa Park in Dubai, and similar facilities in China.
“What none of them has is the authentic and natural wildlife resources that we have. This will extend visitors’ stay and bring economic benefits such as jobs and income.
“The Santonga Park is a must see for tourists to view canned and caged wildlife together with historical and cultural monuments,” said Africa Albida.
The theme park is expected to create 1,500 direct and downstream jobs  while the developer expects a 40 percent increase in hotel occupancy rate, between 20 and 40 percent increase in transport activity among other benefits.
“This may all be good for African Albida but not necessarily for the wider community. All residents and businesses in Victoria Falls should take a keen interest in understanding exactly what this project is really about,” it said.
In 2013, government announced plans to establish a $300 million “Disneyland in Africa” theme park on 1,200 ha of land near the airport which will house shopping malls, banks, exhibition and entertainment facilities such as casinos.Advertisement