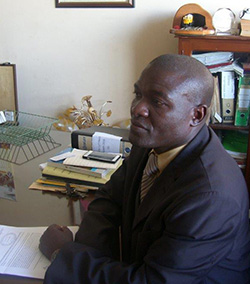 THE National Railways of Zimbabwe (NRZ) which is facing serious viability challenges and failing to pay workers for months has hired a new public relations manager, it has emerged.
Workers at the parastatal have hone for months without getting their salaries. Some 500 were retrenched in 2015 and many of these have been protesting around the country demanding payment of their terminal benefits.
According to board chairman, Larry Mavhima, the organisation will again retrench nearly 50% of its workforce as it looks to maintaining a manageable workforce.
Even so, the company recently hired Journalist, Nyasha Maravanyika, as its new Public Relations Manager, replacing Funuel Masikati who retired late last year.
Maravanyika said his immediate task will be to improve the company’s corporate communication governance.
In a related development, government controlled coal miner, Hwange Colliery, which is struggling with viability challenges, has also appointed former ZBC reporter Rugare Dhobbie as new Corporate Affairs Manager.
According to an internal memo seen by NewZimbabwe.Com, Dhobbie started work at the start of April.
“Three newly recruited senior managers will be joining the company to assume duty on 1 April 2017.
“The four are Rugare Dhobbie (Corporate Affairs Manager), Martin Chiwora (Materials and Inbound Logistics manager) and Misheck Sithole (Strategic Sourcing Manager).
“They will be commencing induction on Monday, 3r April and will visit each of the departments,” reads part of the memo signed by a R Munangwa, the company’s Human Resources manager.Advertisement