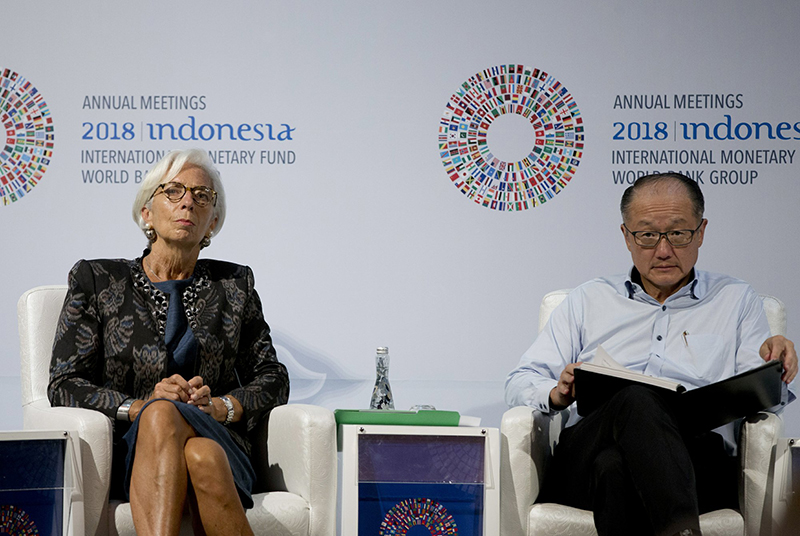 Threats to growth and the trade that helps drive it are overshadowing the gathering of finance officials, central bankers and other leaders on the Indonesian island of Bali, a tropical tourist destination that reflects Indonesia’s own rapid development over the past three decades.

Kim joined IMF chief Christine Lagarde and others in warning of the risks to world growth and economic development from threats to world trade after the U.S. imposed tariffs on tens of millions of dollars of Chinese exports and Beijing responded with similar retaliatory taxes on imports of U.S. goods.

“We’re very concerned about trade tensions,” Kim said. “Trade is very critical because that is what has lifted people out of extreme poverty.

“I am a globalist. That is my job. That is our only chance of ending extreme poverty. We need more trade not less trade,” he said at a news conference.

He said the World Bank was working with countries to prepare for a worsening situation because if tariffs were imposed to the most extreme limits there would be a “clear slowdown and the impact on the developing countries would be greater.”

Kim said the bank had offered help to Indonesia for its recent earthquake and tsunami and other disasters. The people gathered in Bali for the meetings got a taste of such threats themselves with a predawn earthquake that shook hotels in the resort area cordoned off for the event. Indonesian officials said the worst damage occurred on Java island. There was no evidence of severe damage in the area near the finance meetings.