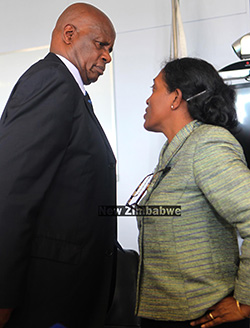 THE World Bank has set up a multi-donor trust fund for Zimbabwe which could raise $100 million next year, a gesture signalling that the institution was re-engaging with the bankrupt country.
The global development agency suspended aid to Zimbabwe in 2000 after the country defaulted on its arrears.
The new endowment would fund government investment projects and provide technical support, World Bank country director for Zimbabwe, Zambia and Malawi, Kundavhi Kadiresan, told a joint media briefing with finance minister Patrick Chinamasa on Wednesday.
She said the European Union, United Kingdom, Germany, Norway, Denmark and Sweden and the World Bank State and Peace Building Fund have pledged $44 million towards the fund.
“We are currently starting a new multi-donor trust fund which is called the Zimbabwe Reconstruction Fund (ZimRef) and again contributions will come from many development partners with over $40 million committed and we expect the money in the coming year. It could easily increase to $100 million,” she said.
“The main purpose of this fund, ZimRef is basically to help us expand our activities here and it will go beyond technical assistance, capacity building and analytical work.
“For the first time we will also have activities including investment projects. To that end we will be working very closely with government on some of the priority areas (and) help to implement ZimAsset.”
She said the fund signaled improved relations between Zimbabwe and international financiers. The country  owes the IMF and the World Bank $124 million and $1billion respectively, while its external debt totals around $10 billion.
“We have renewed our efforts to find the resolution of the outstanding arrears that Zimbabwe owes to the World Bank,” Kadiresan said.

Finance minister Chinamasa said he is considering a parallel process of growing the economy and carrying out a public sector audit before undertaking a retrenchment exercise to create fiscal space.
He said he would work closely with the World Bank in carrying out the exercise. On Tuesday he told Parliament that the number of government workers had risen from 315,000 in 2009 to 554,000 this year.Advertisement

With recurrent expenditure hovering around 82 percent, mainly driven by the public sector wage bill, government has struggled to fund capital projects, social spending and clear arrears accrued from multilateral financial institutions.
“In my earlier conversation with the World Bank, I asked for technical assistance (on) how to tackle the wage bill. I would want to see what options are there,” Chinamasa said.
“We need that rationalisation but, above all, we need to understand what basically composes our payroll. For that of course I will also need some money and the ZimRef fund will also be an easy pot for me to dip into.”
The move by government to reduce its wage bill and create fiscal space for capital projects also signals a desire to meet International Monetary Fund (IMF) targets under its staff monitored programme (SMP), an informal and flexible instrument for dialogue between IMF staff and a member country on its economic policies.
At the conclusion of the first SMP in June this year, government had missed key benchmarks such as the reduction of the government wage bill and enhancing transparency in diamond mining and trade.
It was also behind in implementing some legislative reforms, especially in the mining and financial sectors.
However, the IMF expressed satisfaction with Harare’s commitment and agreed on a new monitored programme which is expected to lapse next October. A successful conclusion to the programme could open the door to financial assistance, the IMF said.
In 2010, a group of western donors set up Zimbabwe Multi-donor Trust Fund (Zim-Fund), which is managed by the African Development Bank (AfDB) in a bid to support the then unity government’s economic recovery efforts. The fund focuses on infrastructure projects, mostly water, sanitation and energy.