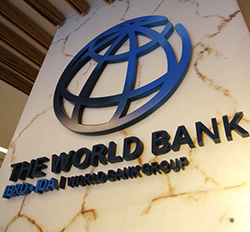 BOLD measures to reform Zimbabwe’s public spending are needed to lift the country out of financial crisis and sustain growth, the World Bank has said.
The bank published its most recent economic update for the country today, alongside a five-volume review into the finances of its public sector. It found factors like a huge wage bill and too many risky state-owned enterprises were dragging on growth.
Without action, the report said that growth, while expected to increase moderately to 2.8% this year, may remain too low to improve per capita income levels as exports recover, imports are curtailed by administrative measures and ongoing financial fragility hinders investments.
Paul Noumba Um, World Bank country director for Zimbabwe, said bringing the deficit down to below 7% of GDP would be critical to regaining financial stability.
“[This] may require difficult measures to reduce the large public sector wage bill,” he added. This stood at an enormous 22% of GDP, 82% of total current expenditure and 87% of total domestic revenue in 2015.
In key services, such as basic education, employment costs account for 98% of line ministries’ budget, leaving little room for pressing capital and programme-related needs in schools.
Some local governments and other public bodies have fallen into arrears with salary payments as a result, an issue exacerbated by the current economic crises and associated cash shortage.
Hit by a triple-whammy of severe drought, falling commodity prices and the appreciation of the US dollar, the Zimbabwean economy has faltered.
This prompted the government to intervene in a number of sectors, namely agriculture, issue new currency to ease dollar shortages and warn that the deficit could widen to nearly eight times that forecast.Advertisement

The bank, however, said that the dominant role of the state in the economy, while at times critical to addressing short-term vulnerabilities, has become a “significant obstacle” to long-term growth.
Zimbabwe’s public sector accounts for around 50% of GDP, which the bank described as a conservative estimate and “exceptional” for a relatively small, low-income country of 15.6 million people.
Some of the country’s spending works to exacerbate, rather than reduce, inequality. Public sector pensions – for civil servants who already consume over 20% of GDP, while making up 1.6% of the population – dominate social spending, with little allocated to welfare and safety nets.
A complex web of user fees, tariffs, subsidies and social transfers also raised concerns around equity, while it was “all but impossible” to unravel the benefits of state-owned enterprises and other state-linked bodies to households and the economy.
Such organisations represent around 26% of the country’s economy, and the largest source of fiscal and economic risks.
Most are accumulating losses and short-term debt, losing equity and stacking up contingent liabilities, which totalled 13% of GDP in 2014.
The bank commended Zimbabwe’s efforts since 2009 to rebuild its public financial management system, but said it should go further: consolidating public sector accounts; reforming local government financing; and passing a corporate governance bill for state-linked organisations.
Johannes Herderschee, senior country economist at the bank, said it recommends stronger oversight of all areas of public sector spending.
“This would allow for a more coordinated fiscal policy and efficient use of government resource.”