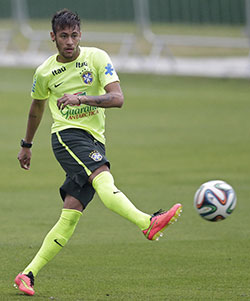 IT’S almost time. The day Brazilians have been anxiously waiting for has finally arrived.
Brazil plays Croatia on Thursday to get the home World Cup underway, beginning its quest for a sixth world title almost seven years after the nation was picked as host.
After so much talk about delays, protests and problems, fans at last are getting a chance to cheer for the national team on home soil in football’s showcase tournament.
If Brazil wins the opening game, the fact that the stadium in Sao Paulo isn’t even fully finished yet will quickly be forgotten. A loss, quite simply, is unthinkable for a nation whose identity is so closely linked to its football team.
Brazil hasn’t hosted the World Cup since 1950, when it endured a heart-breaking loss to Uruguay in the last title-deciding game. This time, everybody knows that only the title will be enough to please the home crowd.
“We are all eager to get started, we are just counting the days,” Brazil midfielder Ramires said Tuesday.
“We know that the fans have confidence in our team and they are behind us. We have to do everything possible to try to win this World Cup. We know everybody is expecting us to do it.”

World Cup … A fan ties his country’s flag on top of his car, outside Arena de Sao Paulo