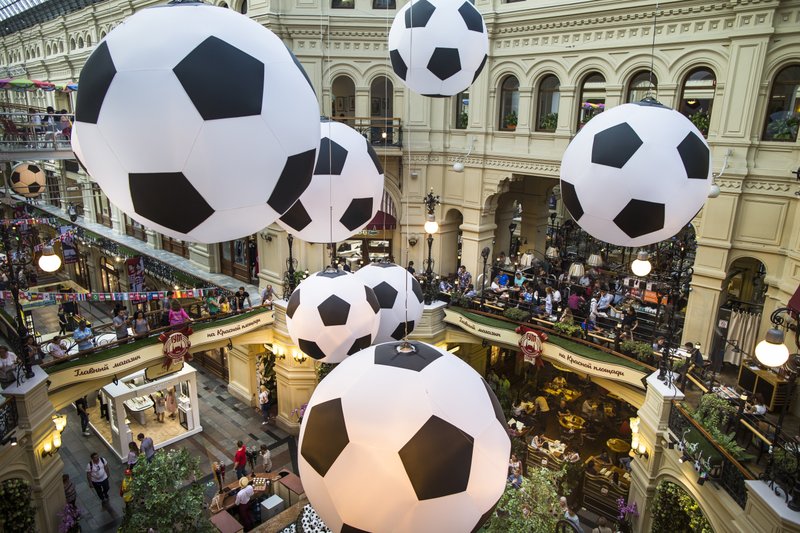 The Russian president was counting on just such a boost after U.S. and European sanctions and low oil prices sank the country into recession, and after Russia’s government spent 800 billion rubles ($12.7 billion) to ready for the World Cup. But experts warn the boon won’t last long without deeper change to the oil-reliant, corruption-tainted Russian economy.

Here’s a look at some businesses booming thanks to the World Cup:

Among the big winners: freelance taxi drivers, dating apps and bars where fans gather to watch matches or celebrate their teams’ victory.

“We are so far off the chart on this, we order as much beer in one night as we would order in a month,” said Doug Steele, owner of Papa’s Bar & Grill on Nikolskaya Street just off Red Square. He dragged a keg on a dolly as he talked, too busy to stop.

This neighborhood has become the place to party since the World Cup opened June 14. The block-long GUM shopping mall that faces the Kremlin has seen traffic climb 80 percent compared to the same period last year, according to its manager, Teymuraz Guguberidze.

“The effect is much higher than our expectation,” he said. “It makes us very happy.”

The lift has reached retailers far beyond the Russian capital, helping other host cities far off the tourist path.

The lowest-profile of the bunch, Saransk, spent hundreds of millions of dollars to build a stadium, high-rises and transport to accommodate tens of thousands of visitors who descended in recent weeks. Proud residents rented out their apartments and kept businesses open extra late to host fans after night games. High demand at restaurants so frequently caused shortages that patrons had to make a list of menu items they liked before ordering.

Mexican fans revved up business in the Ural Mountains city of Yekaterinburg, overwhelming vendors at a sports store as they bought up any available souvenirs.

So have visits to lesser-known monuments and cultural sites — a World War II museum in Volgograd, a Cossack village in Rostov, a museum dedicated to the Baltic enclave of Kaliningrad and its most famous resident, philosopher Immanuel Kant .

So much for Russia’s chilly reputation.

Sunny days, white nights and sometimes sweltering temperatures greeted the world’s soccer fans in Russia this month — and no city has benefited more than the Black Sea resort of Sochi.

Long popular with Russians, Sochi finally got a long-awaited spike in foreign visitors this summer as fans from Brazil, Australia and beyond are packing onto its shoreline cafes or visiting its amusement parks.

In St. Petersburg’s northern latitudes, the summer season means that night never really falls, and savvy boat owners are cashing in by taking tourists through the city’s canals all night long.

Russia is hoping for an enduring economic boost, well beyond the World Cup final July 15. But first it has to recoup the costs of preparing for the event — and the prime minister announced this week that the government must spend an additional 800 million rubles ($12.7 million) going forward to maintain World Cup-related sites after the crowds go home.

Moody’s ratings agency warned just before the tournament opened that despite the boost in tourism industry revenues, the World Cup would only make a “short-lived” contribution to the economy. Most host regions are unlikely to keep drawing tourists afterward, Moody’s warned, because they are too hard to reach, too cold and must compete with more attractive destinations elsewhere.

Yet the tournament is bringing intangible advantages that business leaders hope leave a lasting mark.

“The World Cup has a very good influence,” said Guguberidze of Moscow shopping mecca GUM. “It creates a good mood, and leaves a good impression of Russia.”